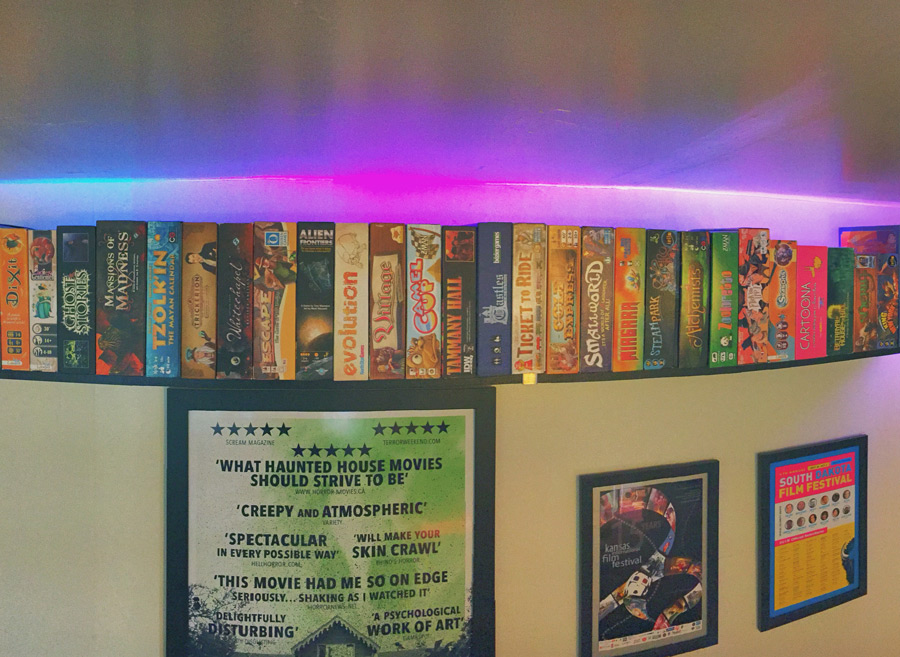 Analog Games aren’t just fun. They also often come in interesting boxes featuring beautiful artwork. It’s no surprise that a lot of us love to proudly showcase our board game collection on a shelf. In this series, every week one of our fellow board game enthusiasts will exhibit their board game shelf and tell us something about their favorite board and card games. Today we are going to look at the board game shelf of Aaron, Austin, and Natalie from Los Angeles! 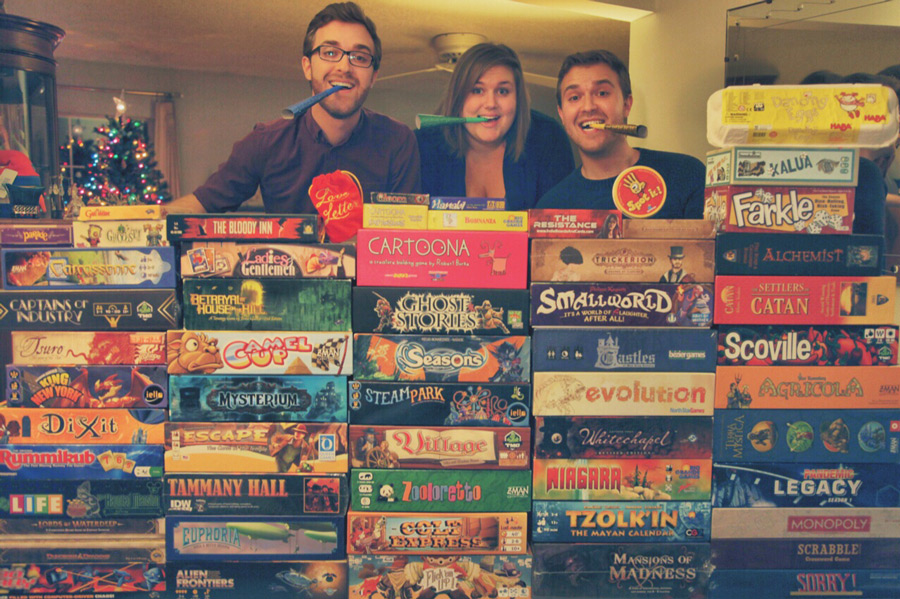 Tabletop Triplets with Our Games!

“We grew up in small-town Kansas and recently moved out to a new apartment in Los Angeles. We’re independent filmmakers and we love horror. We made our first feature film, ‘The House on Pine Street,’ right after graduating college, and we’re currently working on writing feature number two! (You can check out more information about THOPS online, if you’re interested—it’s available in the UK and few other places and will be out in the US sometime this summer!)”

“We are beyond obsessed with board games and we’re slowly (and happily) expanding our collection. Aside from board games and horror, we also love dogs, food, and Disneyland.” 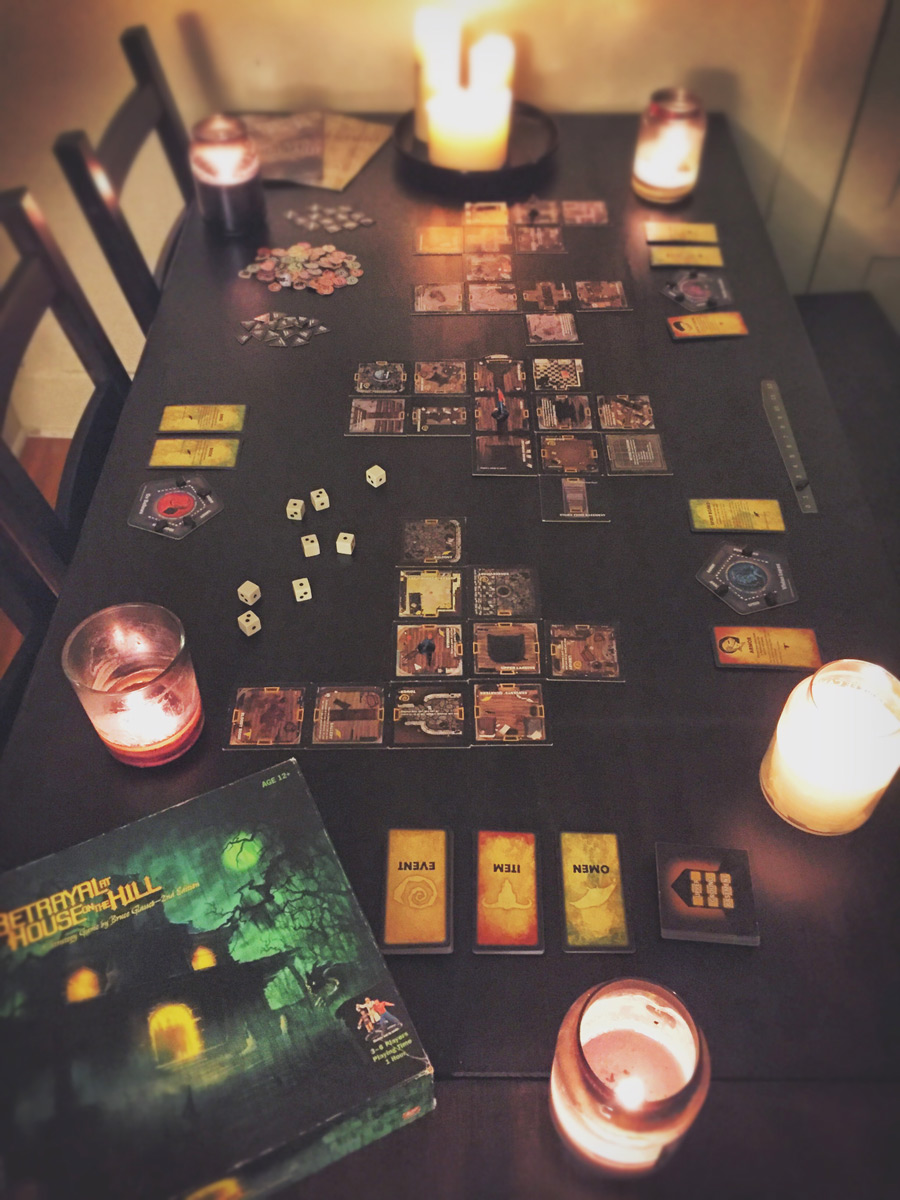 Betrayal at House on the Hill

How did you get into this world of non-digital games?
“A few years ago when we were living together and writing the script for our first film, we often took breaks from working to play some classic games like Monopoly and Rummikub. We had grown up playing games like Risk and Parcheesi with our families, and there were a couple other games here and there, like Battleship and Scrabble, but that was about all that we had played.”

“We knew that there were other games out there, but we had no idea to what extent until one day when Natalie’s friend from high school told her that instead of Monopoly we should try the game Betrayal At House On The Hill

(Lauren—we’re forever in your debt). It was a really unique game about exploring a creepy old haunted house, and since we were writing a script about a haunted house, she thought it’d be right up our alley.”

“It was then that we became aware of just how many games were out there. Natalie’s friend had a group that played board games together, and soon she was sending us tons of recommendations. We bought Betrayal

, and absolutely loved it. We basically threw out Monopoly and played Betrayal over and over and over, wearing down the pieces and the box with all the use.”

“It was a crazy, eye-opening experience playing it for the first time, to realize that games like this existed out there in the world, and it wasn’t long before we were adding to our collection, first with creepy-themed games (our next game was Letters from Whitechapel

) and then with any and every game we could get our hands on. Things steadily snowballed until where we are today—we love board games, and we can’t get enough of them.” 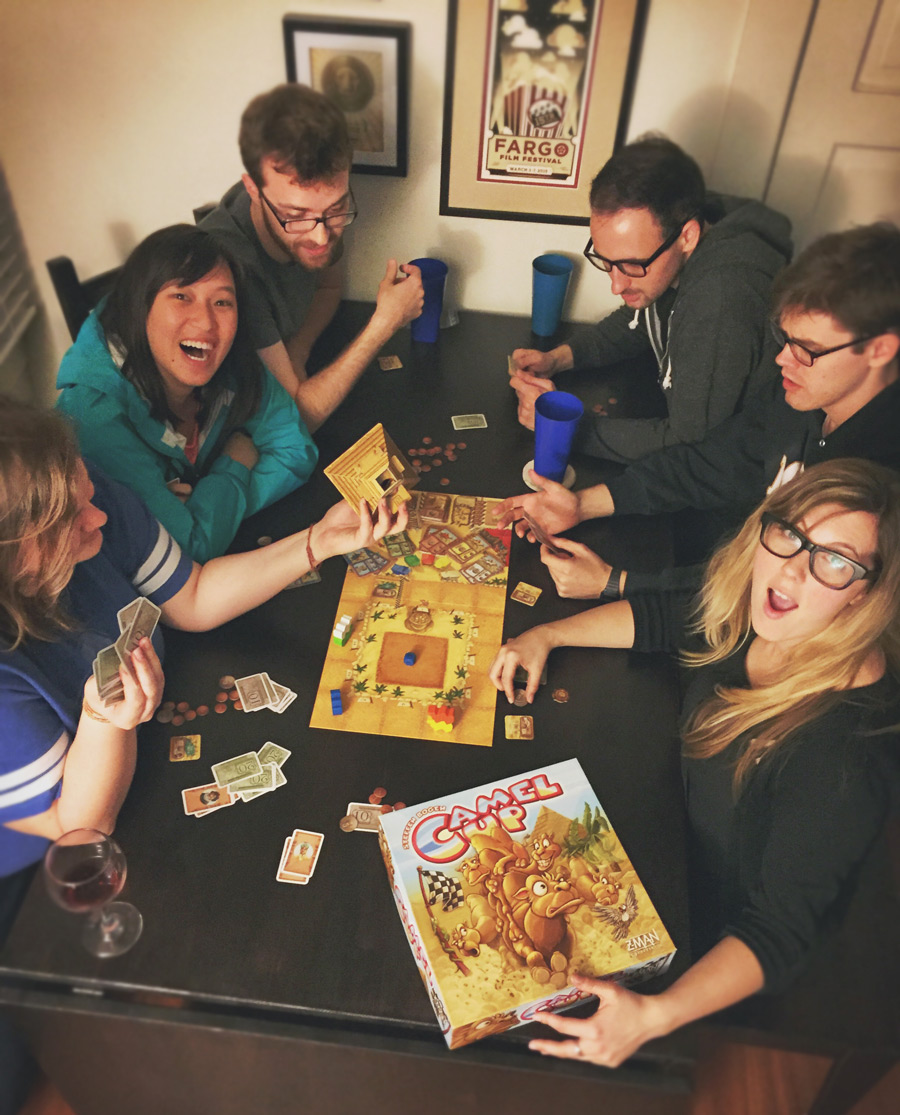 Camel Up with Friends

How often do you play?
“We try to play as often as possible. We usually end up playing a game or two every night, though sometimes life gets in the way and we have to go a short while without playing (which is always THE WORST).”

“We love playing games just the three of us, and we also love having friends over or joining other groups to play. Different people add different flavor to board game experiences, and it’s really fun to mix and match and find certain groups that love certain games or types of games. We love two-player games as well, but there’s nothing like getting a big group of friends together and going all in on a few games!”

“We also love how using Instagram to share our gaming obsession has been able to introduce us to new gaming friends. Over the past few weeks we had the chance to meet up with Instagrammers @boardgameaday (visiting all the way from the Netherlands!) and @officialgaymer (who’s local to LA) to play several games. It was awesome meeting new people who love games as much as we do—they’re both super awesome guys and we hope to play countless more games with them (and many others) in the future!”

“Anyway, back to the question: at the start of the year, Aaron downloaded an app on his phone, Board Game Stats, which he uses to record every play (because he’s crazy), and so far in 2016 we’ve played 65 unique games 178 times with 45 people in 13 locations. And those numbers just keep rising!” 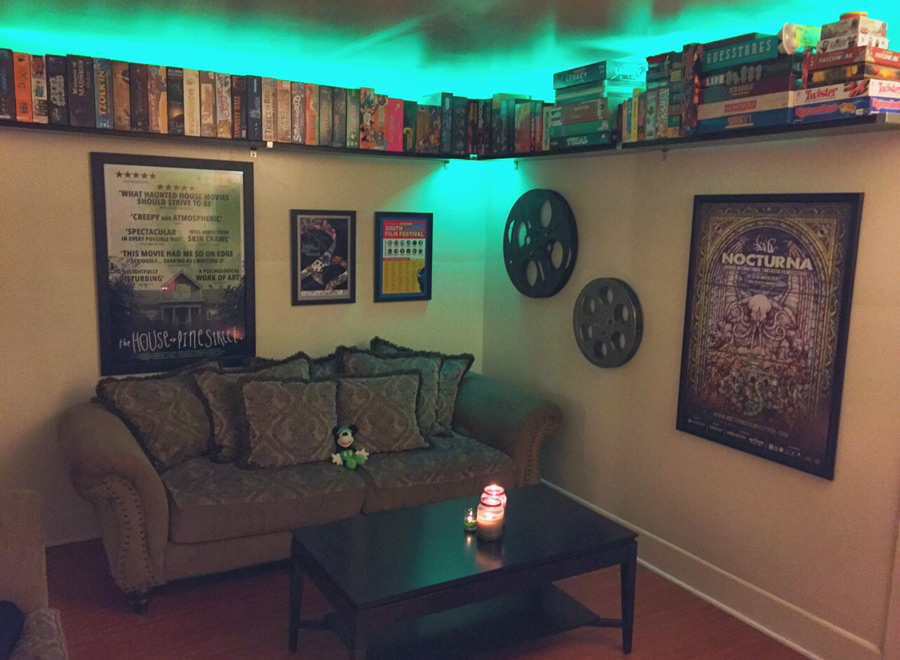 Can you tell us something about your shelves?
“When we moved into our apartment in LA the biggest concern was where we were going to showcase our game collection. We’d been living between various family members’ houses for the past year or so, so our collection had been split up and moving back and forth, and most of the time they were all just stacked up on the floor in the corner of a room.” 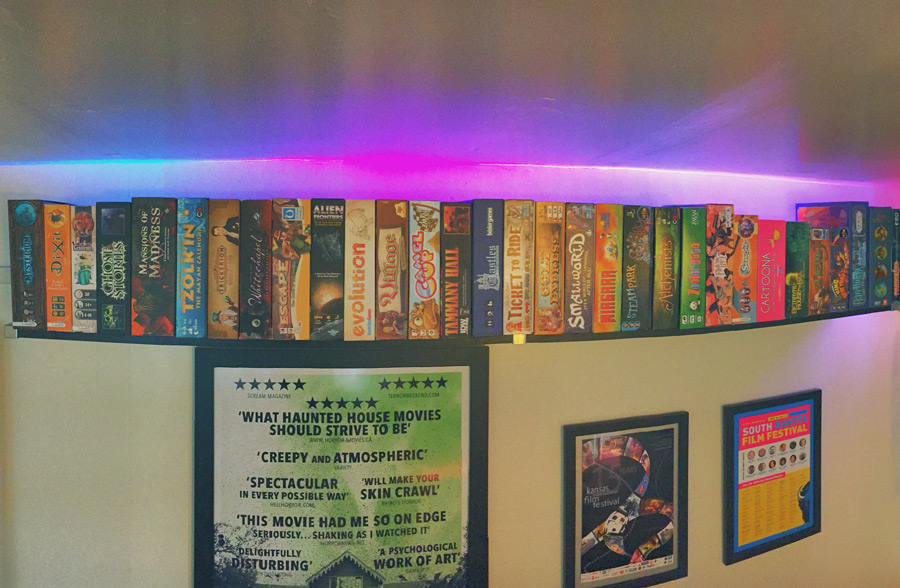 “We wanted to make sure with the move that our collection would finally get the space it deserves—all the games together in one place and in a spot of prominence, not just thrown on the floor somewhere. So we decided to put some shelves up along the perimeter of our living room to hold them! Natalie’s friend Lauren stored her and her boyfriend’s collection on a series of built in shelves near the ceiling in their super cool and hip Chicago apartment, so we took inspiration from them. And then we decided to backlight the shelves with color changing LED lights, because why not?” 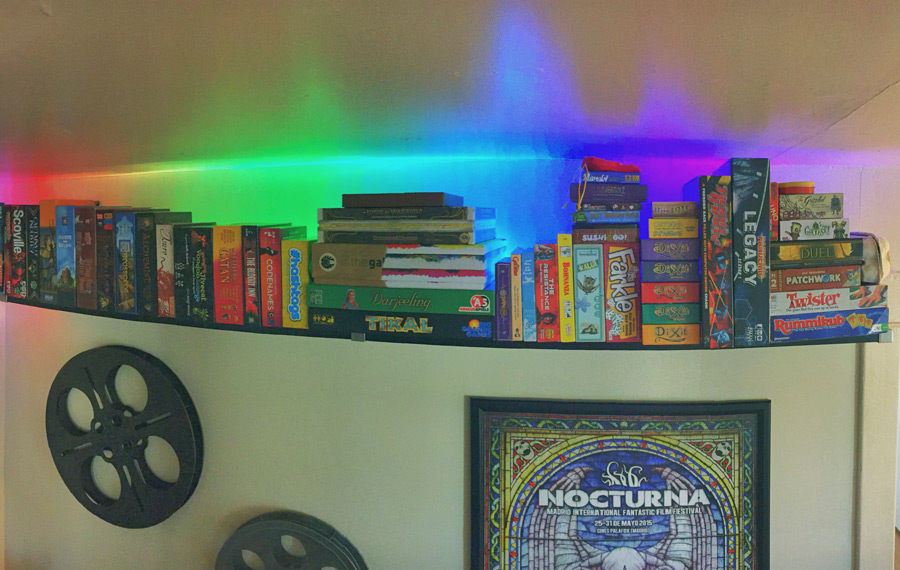 “We love our shelves—they’re definitely the pride and joy of our apartment. They’re pretty much front and center when you walk in, so there’s no way to miss them. And we love using the color changing lights to enhance the mood! We change the color depending on what game we’re playing (or what holiday is coming up!), and it always makes things more atmospheric and wonderful.” 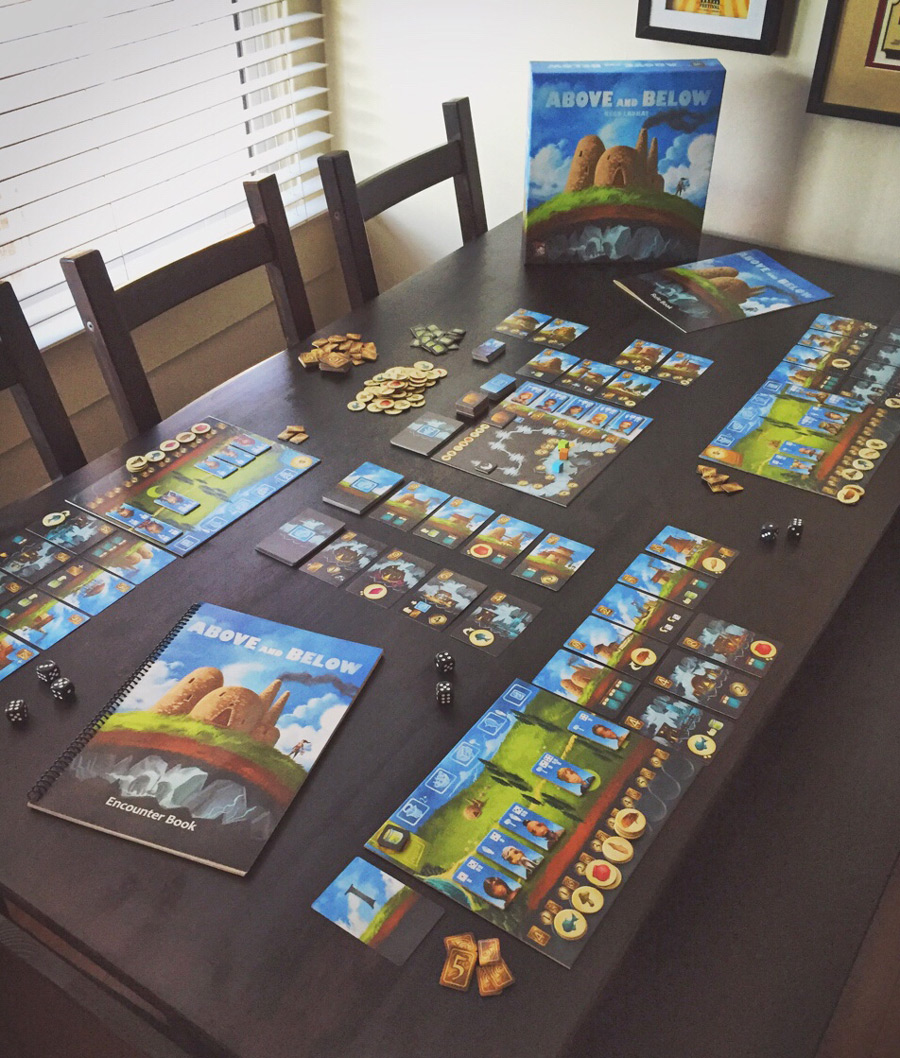 . It’s a super fun combination of several different elements, with a bit of storytelling and amazing artwork thrown into the mix. We love it. But it’s so hard to pick just one favorite. We love pretty much every game we own.”

, but we also love simpler party games like Codenames

. And then of course there are the more in between crowd pleasers like Bohnanza

, both of which are at the very top of our list. And how can we give a list of favorite games without mentioning Pandemic Legacy

“But really our favorites ebb and flow depending on the group of friends we’re playing with. We tend to reserve the really complicated ones for just the three of us, but we love breaking them out and introducing them to our friends who are interested—as long as they aren’t scared away by the hefty rulebooks! The greatest is when we get a group of very different friends together with varying interests and have everyone unite over a game. Board games are such intensely social experiences, and we’ve learned that they’re absolutely the best at bringing people together.” 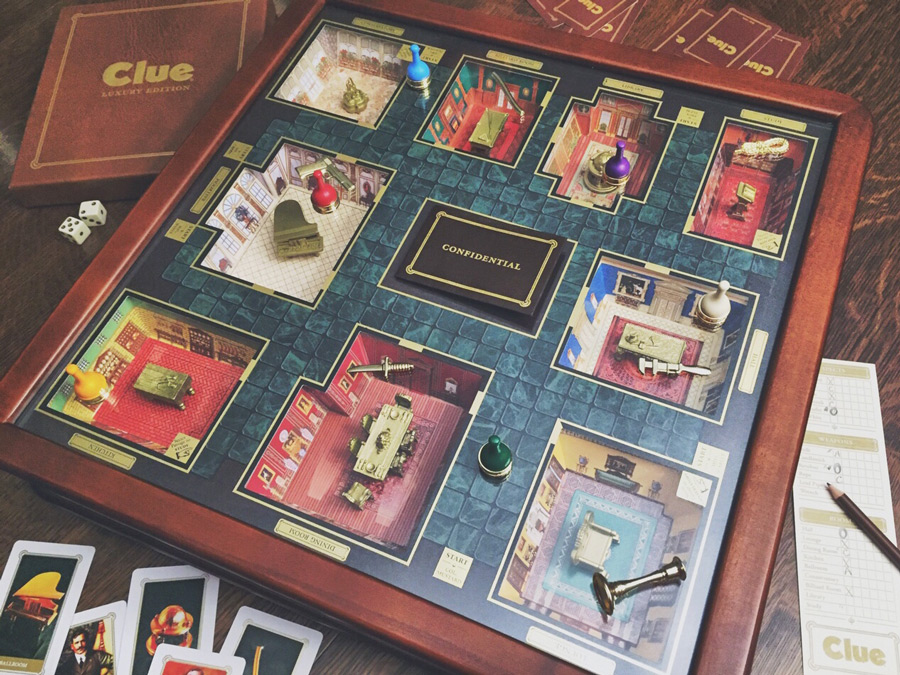 What is your most special or obscure game?
“None of our games are particularly obscure, though the one we definitely get asked about most often is Haba’s Dancing Eggs

. It’s a really simple game intended mostly for children, but we love it, and it never fails to prompt someone to ask why we have a carton of eggs on our board game shelves. We also have the Luxury Edition of Clue as the centerpiece of our dining table, and while the game itself isn’t obscure in the slightest, the version we have is pretty unique and a great conversation piece. Pretty much all of the games we have are obscure to our non-gaming or new-to-gaming friends, much like they all were to us when we discovered this crazy awesome world not too long ago!” 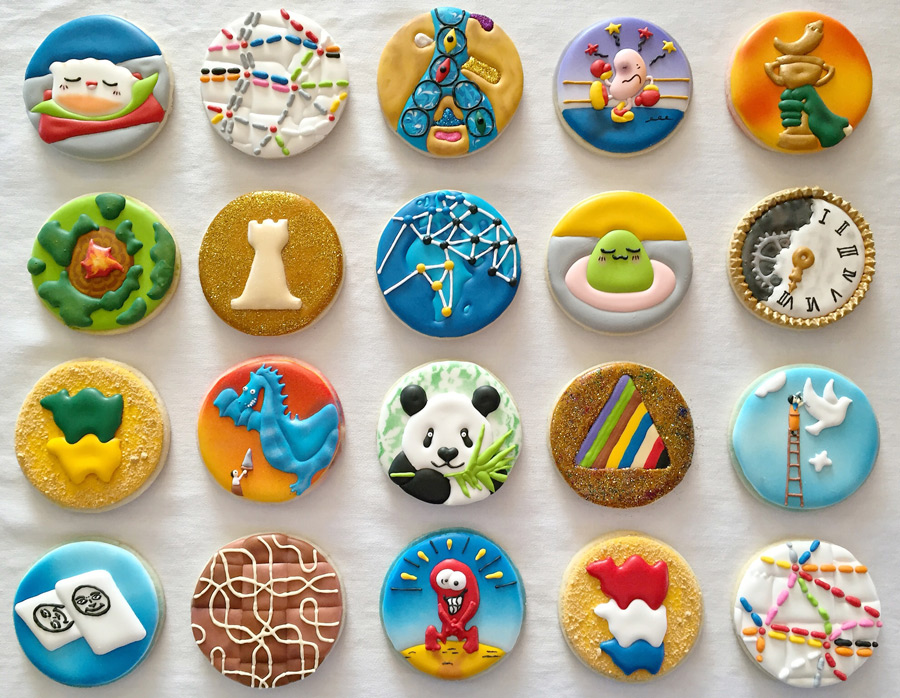 Thank you so much for sharing your story! Something you would like to add?
“We’re still relatively new to the whole world of analog games, and we are so excited by all that we still have to discover. We would absolutely love to meet fellow game enthusiasts out there and explore this world together, so if you ever find yourself in the LA area and are looking for some new, crazy, board-game-obsessed friends, then definitely hit us up on Instagram (@tabletoptriplets)! We’d love to meet up and play a few (or a million) games with you!” 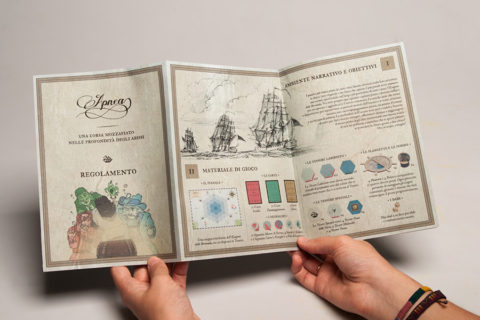 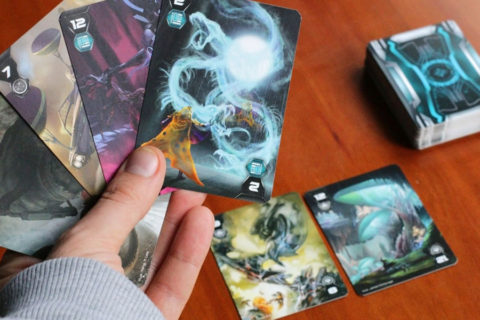 Tabletop roleplaying game with a card based mechanic 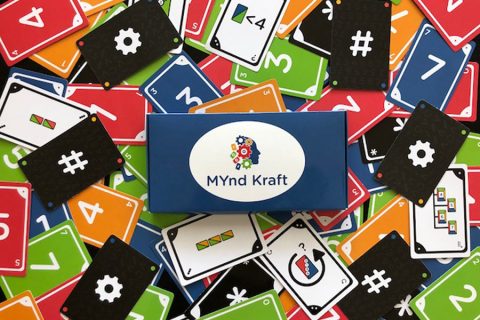