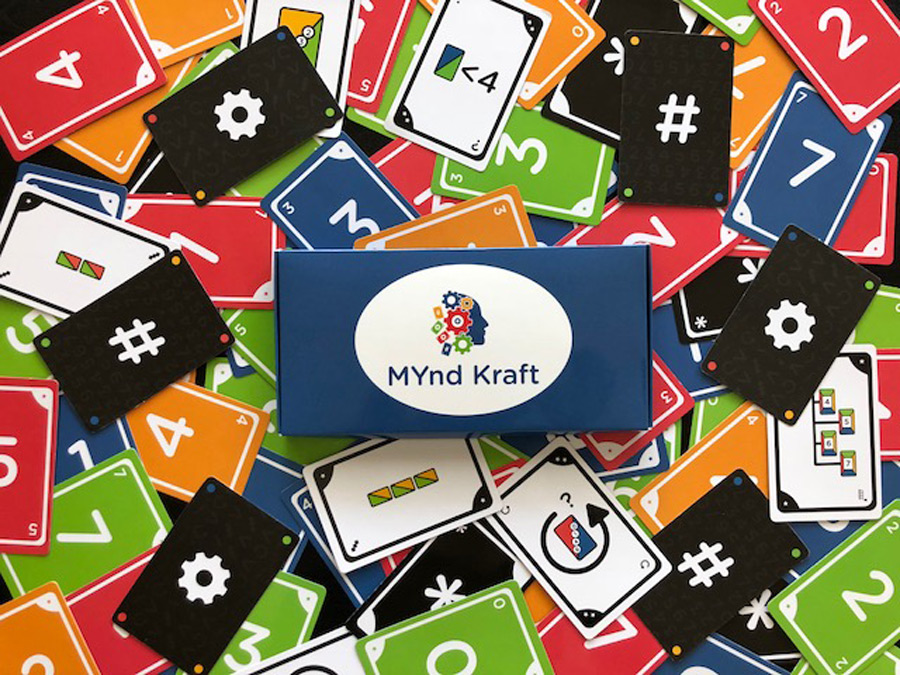 I’m Tharini (‘T’ for short)—a 30 something cool, geeky girl who happens to be the creator of a new, somewhat nerdy yet awesome card game called MYnd Kraft. This is my story about how I created MYnd Kraft and how through this game, I rediscovered my love for card games.

I used to love card games as a child and played them all the time with my two sisters. Unfortunately, as I got older and reached my teens, life (i.e. extra-curricular activities, sports, exams, boyfriends, social life) got in the way and I never seemed to have time for card games anymore. Sadly, this trend continued and I didn’t have time in university either and then once I joined the corporate world, I literally never had time for anything!

When I was on holiday last year, I agreed to babysit my two nephews—as loving aunts generally do. Of course, at the time, I didn’t realise what I was signing up for. When babysitting them, I literally tried every conceivable way of entertaining them including playing some of the board/card games they had, but they said they were bored of playing the same games. Arrrrggghhhhhhhh!!!!!!

Leading up to our holiday, my amazing husband—a 30 something not-so-cool, super geeky guy—had been trying to teach me the basics of programming/coding. I knew there was no way my nephews knew the basics of programming, so in desperate need of a solution, I used this knowledge on programming and created a game with some hand-drawn cards on paper and tried entertaining them. To my surprise, they loved the game! I initially thought it was the novelty of the game that they found interesting but strangely, throughout the holiday they wanted to keep playing the game. I was shocked, thrilled, puzzled all at the same time so I asked my elder nephew what he liked about it and he said “I had fun using my super mind powers!” With that response—I was more puzzled than I was before I asked the question! 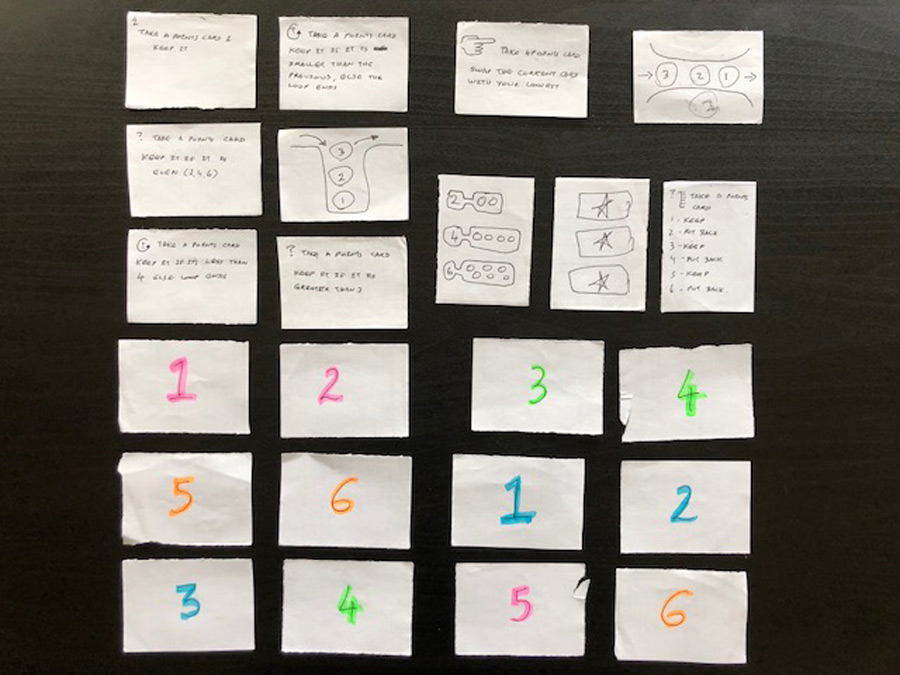 First version of cards: Hand-drawn on pieces of paper

Anyway, when I returned from my holiday, I was curious to find out what others thought of the game besides my darling nephews who were buttering me up to get what they wanted. So, with the help of my husband, I revised the cards and created a new set of cards and played the game with our friends and their kids. Yet again, I was shocked, thrilled and puzzled at the positive response and interest in the game. So, I kept playing the game with more and more people and based on the feedback received, I kept revising the cards, game play, rules etc. 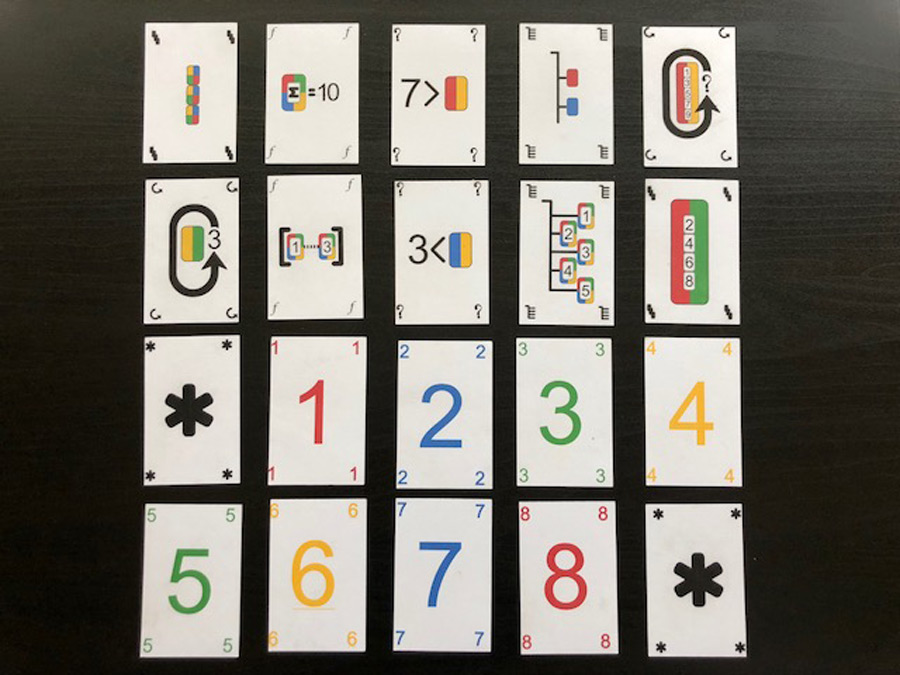 Something that I kept remembering was how my nephews said they didn’t want to play the same old board/card games they had, as they were bored of them. So, I thought to myself, what if there were a number of different games that could be played with my deck of cards, similar to a standard, classic card deck? That would be pretty cool because if someone’s bored of playing one of the games, then they could play another one with the same deck of cards. Variety and choice is never a bad thing after all! So after numerous hours of testing different game ideas I had with me, myself and I, I came up with a few more games. Then I tested them with my husband and those that passed his critical eye were tested further with our friends and their kids. As I did with the original game, I used the feedback to revise game play, the rules and the feedback even gave me ideas for new potential games.

Seven different games that I came up with overtime

Overtime, I had created 7 different games that could be played with 1 deck of cards! Different games appealed to different groups of people. Younger children enjoyed the simpler games (i.e. EZY CODR, SPEEDY MONSTR, MEMRY FLIPOTHON) and they were great for family fun time too. The simpler games were a big hit with teachers as well, as they were able to use the game as an unplugged tool to teach the basics of programming. The more advanced, strategic games (i.e. DECODE, CODR POKR MATCH, COBBLE THE CODE and CODR LEAGUE) were a big hit with older kids and adults. CODR LEAGUE, which is played in teams of 2, was a big hit at game nights with friends. The game had truly evolved from the makeshift game it was for my nephews to something children, parents, gamers and educators all enjoyed playing. It truly had something to offer everyone!

At that point, I asked all those who played and tested the game, if they would actually pay for the game and the response was overwhelming! It was at this point that I decided to self-publish the game and take it from what was primarily a game played in my living room to a game that could be played in your living room, classroom, hotel room…………pretty much anywhere and everywhere!

As the primary reason my nephew gave for enjoying the game was “I had fun using my super mind powers”, I decided to name the game MYnd Kraft, by combining my nephew’s response ‘my mind’ to read as MYnd, and ‘power’ translated into German, to read as Kraft. Hence, MYnd Kraft. My nephew simply loves the name and of course, he’s taking all the credit for it! 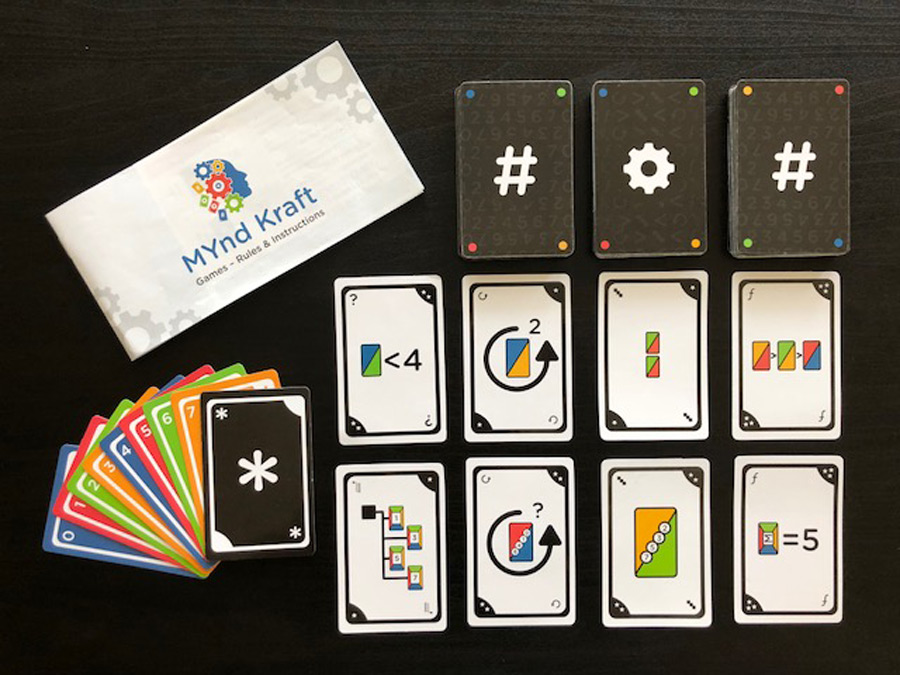 Creating MYnd Kraft has made me enjoy playing card games again, so much so that my husband and I love playing COBBLE THE CODE most evenings when we are by ourselves and CODR LEAGUE when we have friends over. I honestly never thought I would rediscover my love for card games, make time to play them and actually, enjoy playing them. I guess I really didn’t realise what I was signing up for when I decided to babysit my nephews—creating 7 MYnd blowing games with one deck of cards………for the young, the old and every MYnd in between!

MYnd Kraft is now live on Kickstarter so please check out the campaign and help build this game. Your support would be much appreciated!

Please check out the MYnd Kraft website as well, for more information on the various games.

Finally, don’t forget to tell your family and friends about the new card game that allows them to use their super MYnd powers in a fun and exciting way! 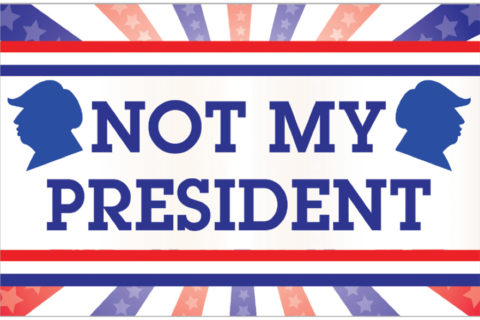 Not My President The Board Game 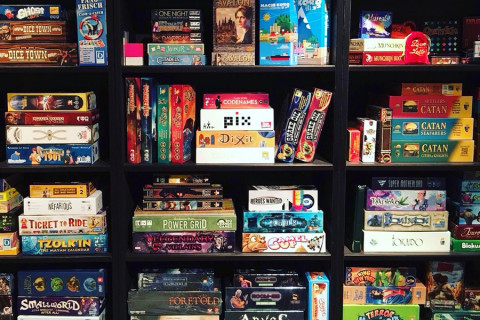 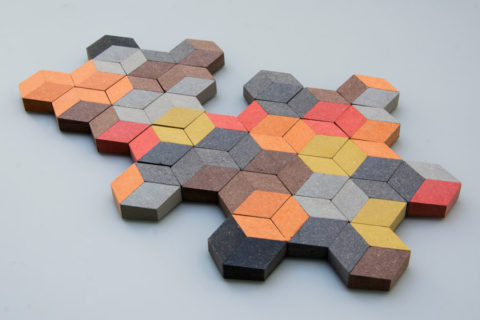 7 responses to “MYnd Kraft – The story behind the new card game for the young, the old and every MYnd in between”

right there so the courtesy of gaming bootcamp, I was just able to learn the whole boarding eco-system from creating panels to it’s structuring and plugin integration was able to make my it happen like never before pumping thumbs!

It’s been an exotic feel to be here and make this story. I am an essay roo writer and would like to tell every one about the services which we can rely on for making articles done on time and with desired content.

everyone about the Seo services which we can rely on for making articles done on time and with desired content.

I’ve been looking for photos and articles on this topic over the past few days due to a school assignment, casino online and I’m really happy to find a post with the material I was looking for! I bookmark and will come often! Thanks 😀