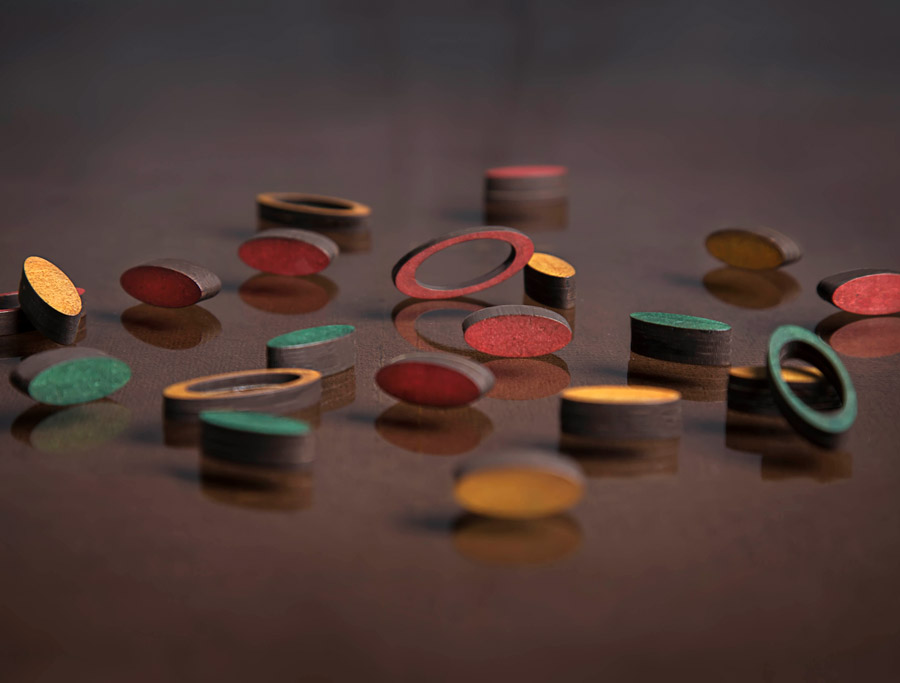 My name is Mohammad Hasan, and my wife is Maryam. We are both pharmacists from Iran. We have been interested in mind games for quite a long time, but our more advanced interest started about 5 years ago. We mainly focus on abstract strategy board game design, but additionally we work on other types of games like role playing, sports and android games. 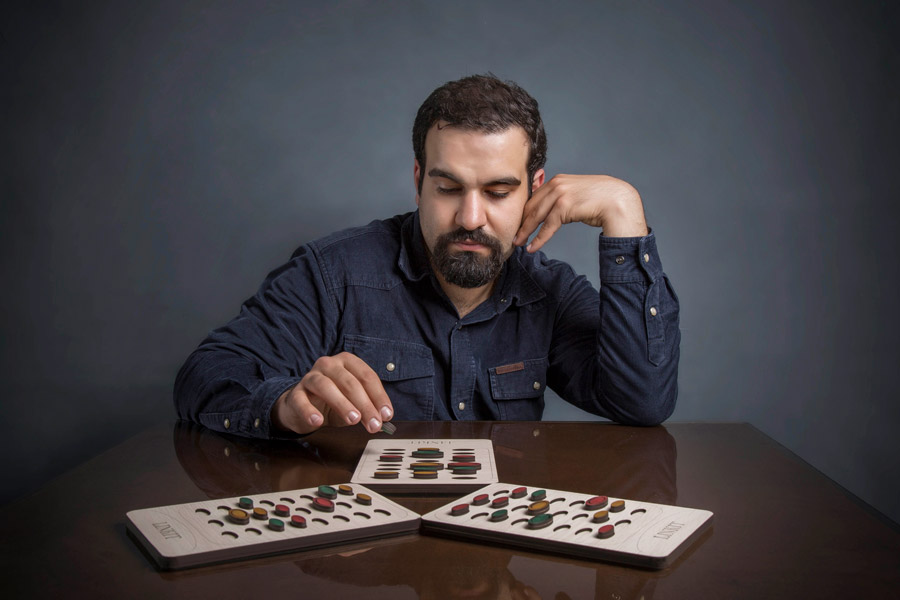 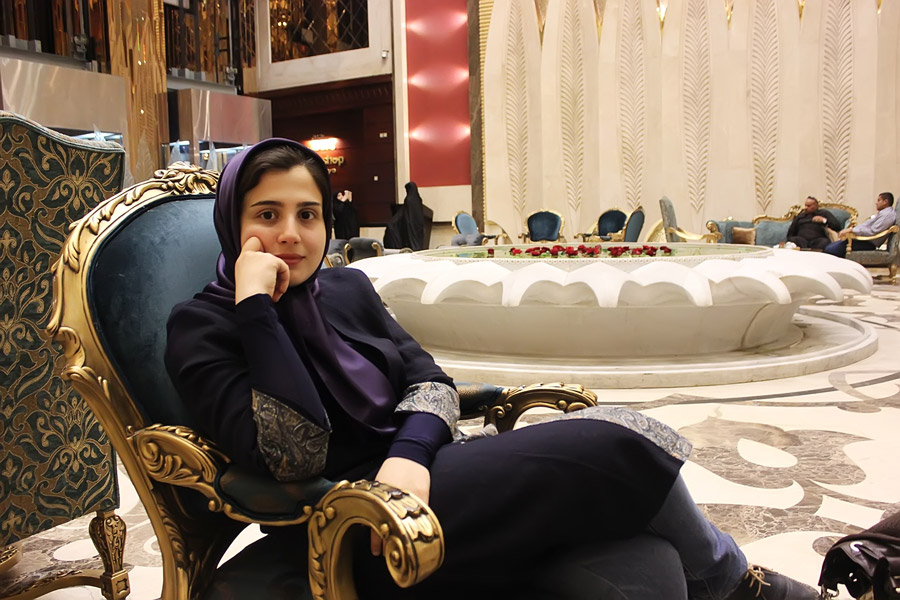 We created our first games 3 years ago: “Raks” and “Sick square”. Unfortunately, they were not successful enough due to their weaknesses in moving components, so we couldn’t introduce them to publishers. One year later, we designed a new game called “Patternavo”. The goal of the game is to avoid some specified patterns during the game. It was a jump forward, creatively. 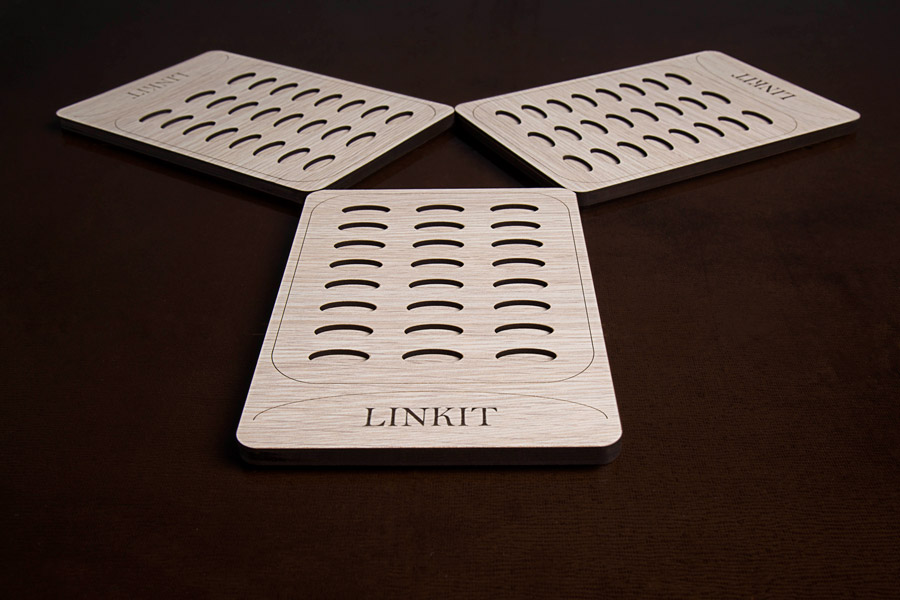 But in this article we would like to talk about our new game “Linkit”. Linkit is a 3-player abstract strategy board game in which every player has a board. Players can only play on their own board, but winning depends on the pieces on all 3 boards. 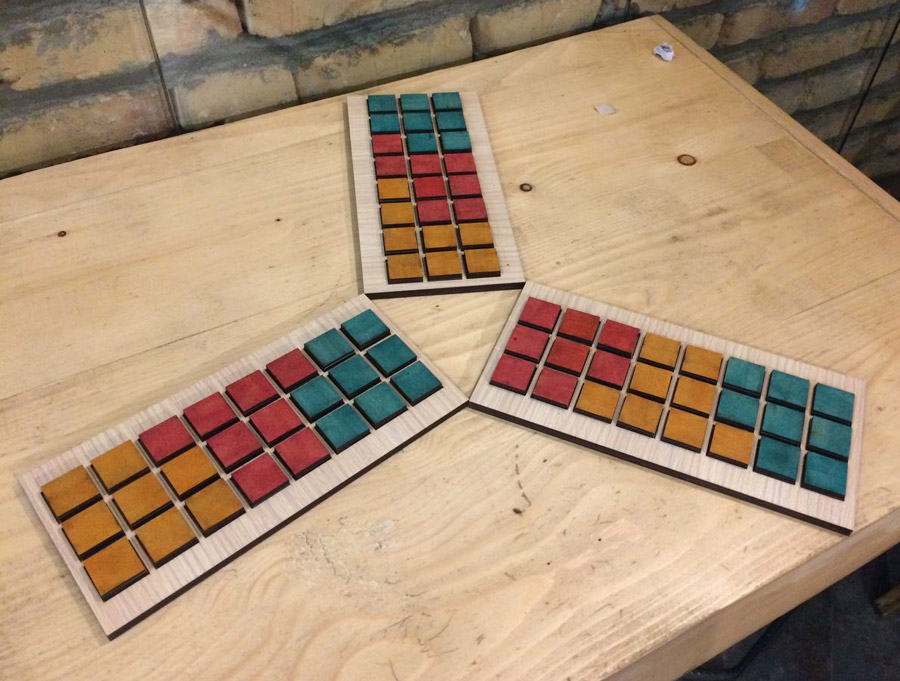 The first prototype was made with square-shaped pieces with rigid angles and a board with a simpler appearance. Although simplicity is an important trait of abstract games, we decided to change the appearance to give it a more dynamic feeling.

All of the components are mode of wood. Each board has 24 places for the ellipse-shaped pawns. The curvatures give the game a friendly and calm appearance. Also, we have tried to choose the colors so that they form a warm network on the boards. 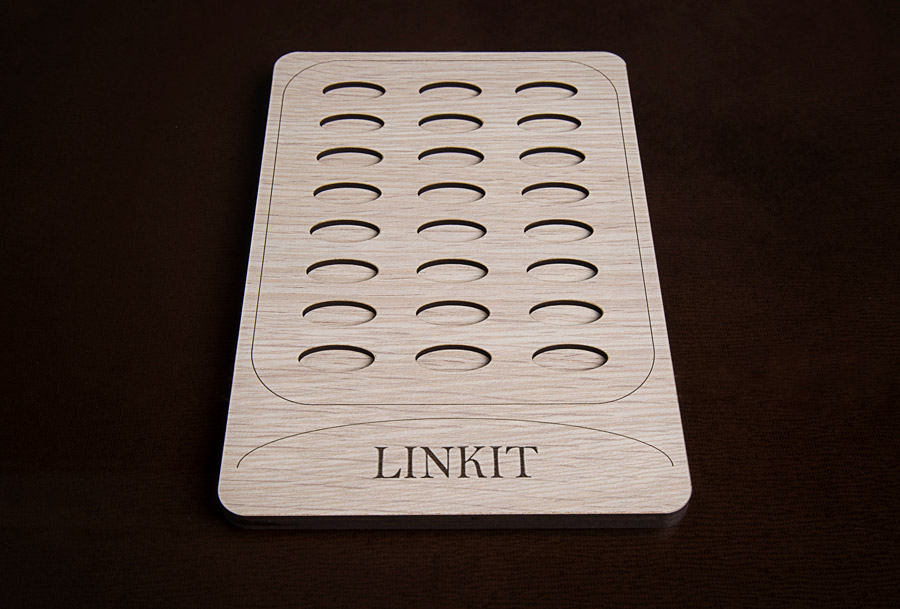 The board. Photo by Amin Mahdavi.

A player possesses the following items:
a. One board
b. 24 pawns
c. 3 Linkit pieces 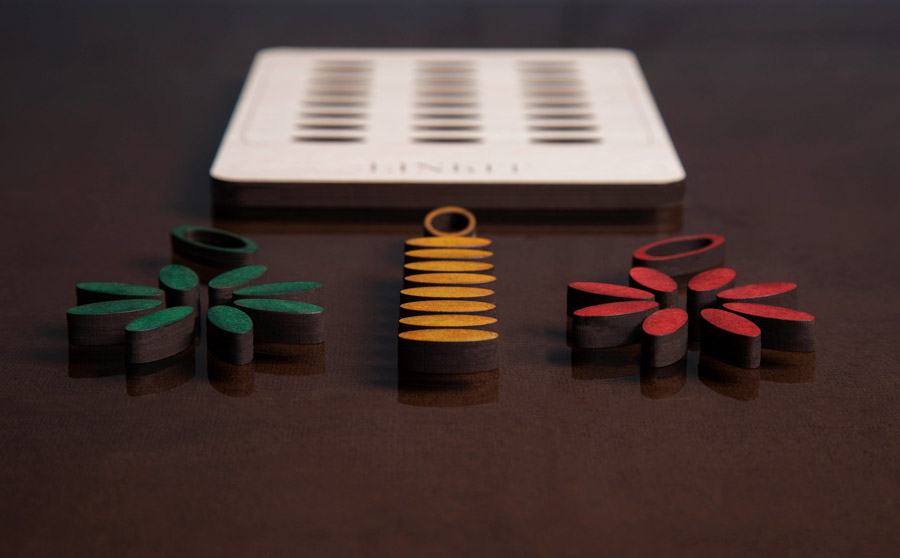 The components. Photo by Amin Mahdavi.

The pawns come in 3 different colors and each player has 8 pawns of each color. During the game they are put in the places on the boards. Also, every player has 3 “Linkit” pieces. The Linkit pieces are in the same colors as the pawns; one Linkit for every 8 pawns. The Linkit determines where a new pawn can be placed on the board. As a pawn is placed, the Linkit is put on that pawn. New pawns can then only be placed in the same line (same column or same row) of the Linkit with the same color. 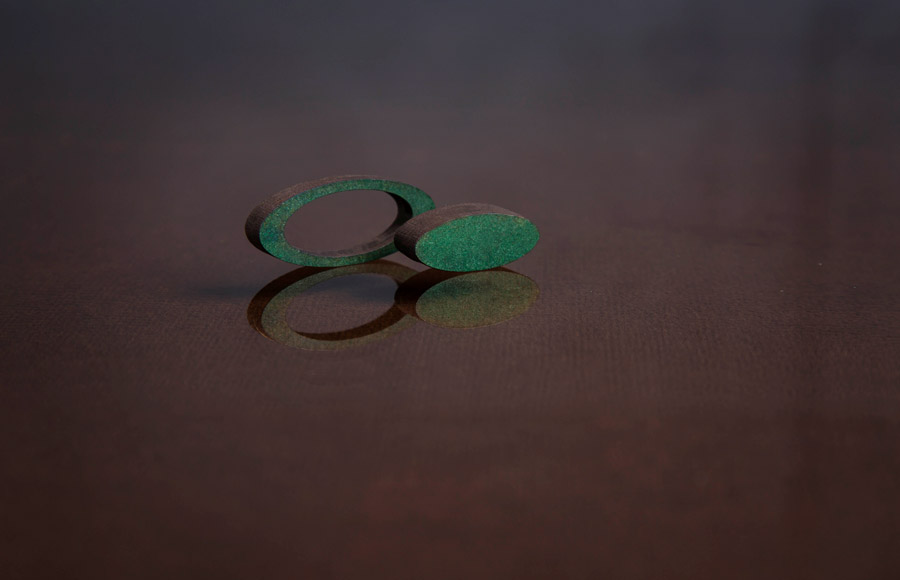 Players take turns in a counterclockwise order. The goal of the game is to connect two other players to each other with a chain of pawns on your board. The boards of the players are assumed to be adjacent to each other and the rows of each board continue on the right and the left boards. In each move, players bring in one of their pawns to build up a chain. The chain should connect at least one pawn of the right player to another pawn of the same color of the left player. The color of the chain should be the same as the connected pawns, like this: 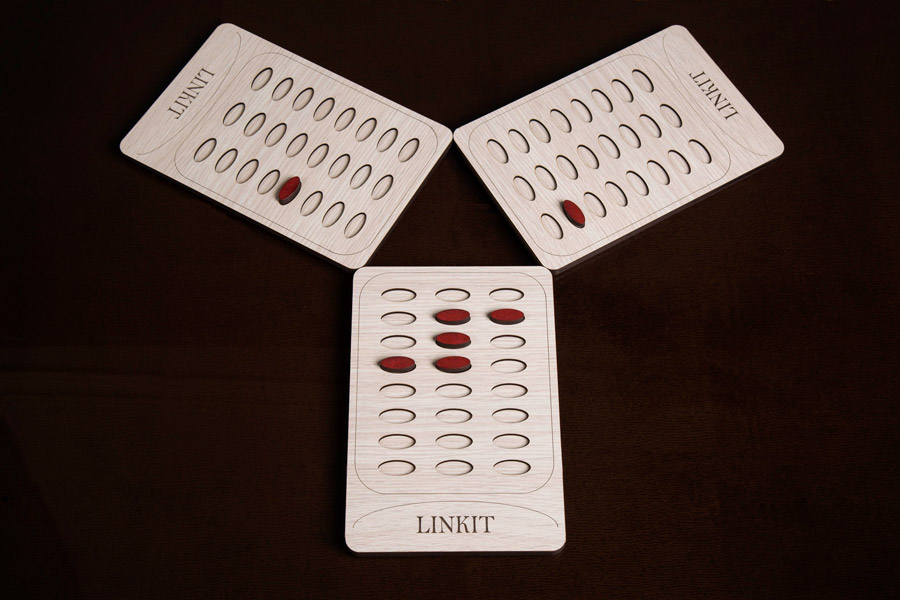 In addition, the boards are vertically unlimited, so a chain may be finished at the top of the board and then continue from the bottom. 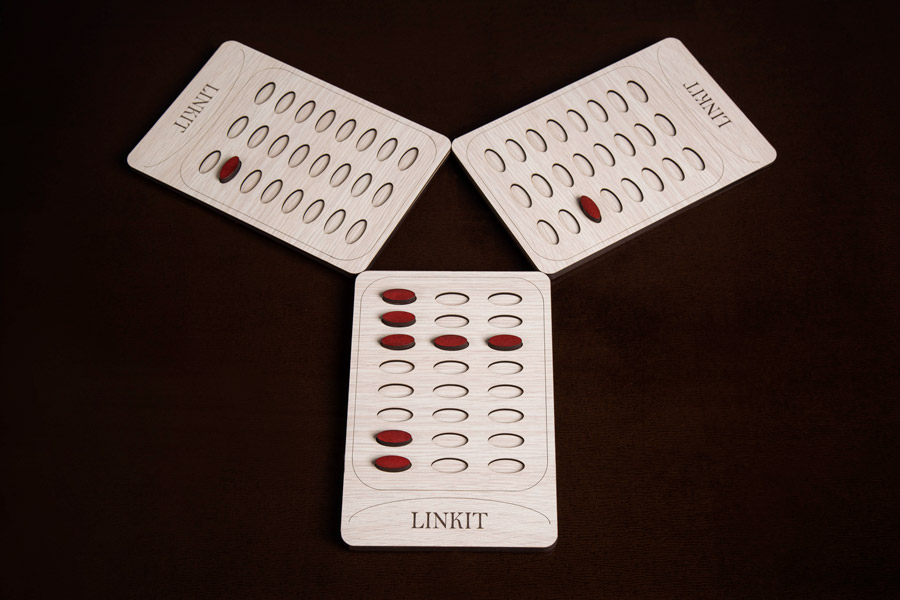 Maryam and I believe that we’ve grown as game designers with time and increased endeavor. We have now been working on a great project of abstract board games consisting of at least 6 games, for about 2 years. They are completely original and we hope we can publish them in the future. We love doing this because for us, games are the simplifiers of life. Each game simulates some part of the world, making life a bit more understandable. 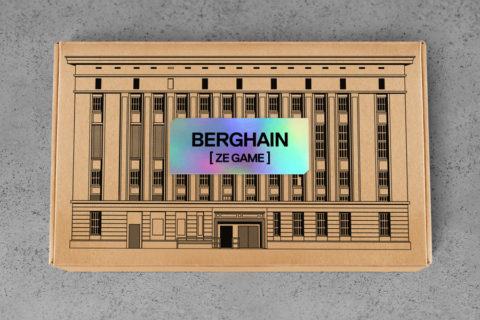 Oh,MG!congratulations my dear brother…I hope your idea will be one of the famous and most popular in all of the world…with the best wishes for you

Sounds like a fun strategic game! Thanks for showing your invention. Can you play this game with 4 players as well by adding an extra board?

That’s a good idea. In this game, each player has only 2 opponents and the simplest group of players consists of 3 players, so in the case of 4 players, 4 groups of players form. In fact, it’s possible to add more players to increase the number of groups. For more detail, contact us:
mohammadhasanjamei@yahoo.com
maryam.firoozi70@gmail.com

I love abstracts, and I wish there were more games that were perfect for three players. I’d be very interested in this. I also love, and agree with, your closing sentences.

Can you include a picture of what the board looks like when someone has won?