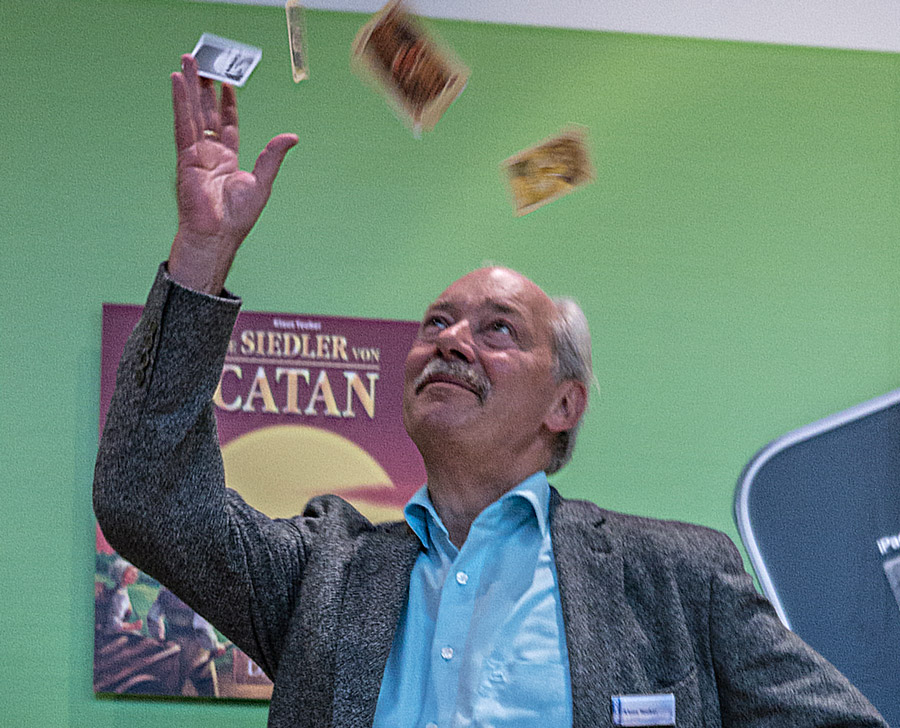 I’m Douglas Morse and I’d like to share with you the story behind my coffee table book Wizards of the Tabletop: Portraits of Game Designers & Accomplices. 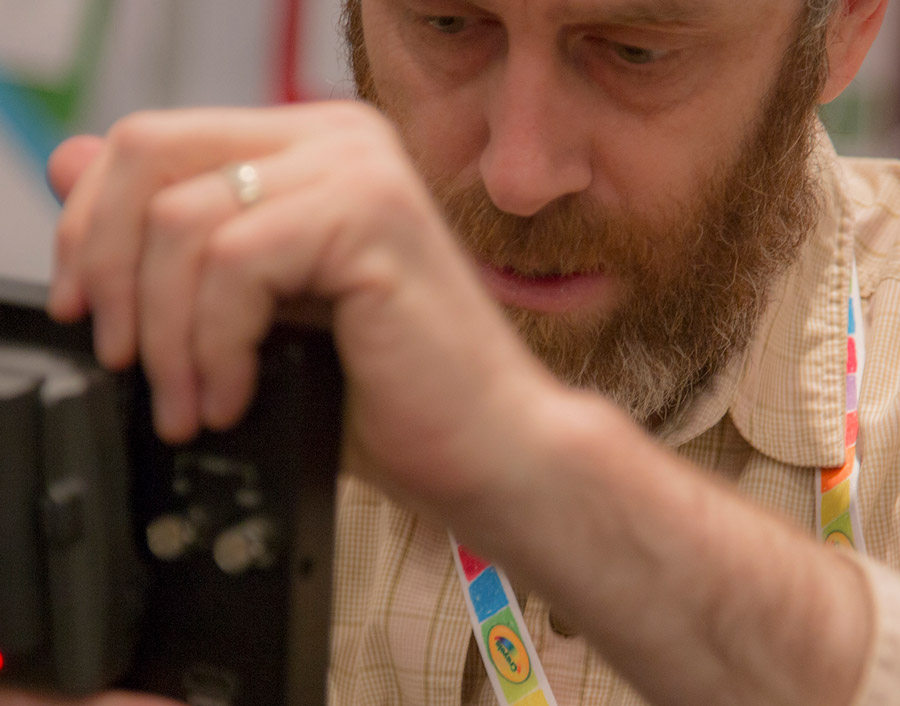 Steve Jackson was exhausted. He had just taken on 12 opponents grand master style in an Ogre Tournament. He won ten of them. But then this indie filmmaker appeared and started asking him questions about game design. I was interested in the development process, the playtesting process, publishing, all of it. We discussed Car Wars

. At some point, I asked him to pose for some portraits. He was very gracious through all of it and then I asked him to do something a bit more unique: lie with the huge Ogre box crushing him. I climbed up on a chair and snapped many shots. 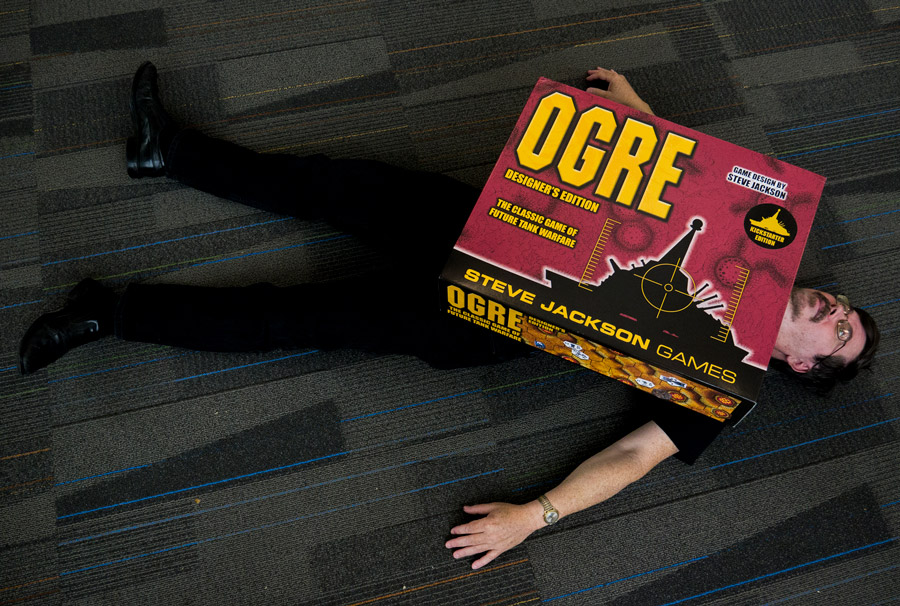 Game designers are creative types, so in general they get that I am after something unusual and they are very willing to play. That first impulse with Steve lead me on a three-year journey taking portraits of game designers. In the best circumstances, there was some way to tie the portrait thematically to a designer’s specific game. In the case of the Ogre box, a tank crushing Steve was a pretty obvious connection. However, I had chatted with Phil Reed, CEO of Steve Jackson Games and he had explained how the Ogre Kickstarter, which raised nearly a million dollars, crushed the company. They kept adding more cardboard to the box and the shipping costs were unexpectedly astronomical. And the amount of other work at SJ Games ground to a crawl. They described the project as a gift for the fans and I think behind that, ultimately the Ogre Designer’s Edition

was subsidized by the continuing gold mine that is Munchkin.

But for me, I felt like a teenager and Steve Jackson was one of my gods. The journey of interviewing and taking photos of heroes was just beginning and would lead to meetings and photographs of Klaus Teuber, Reiner Knizia, and Wolfgang Kramer: what I refer to the trinity of the Euro designers. 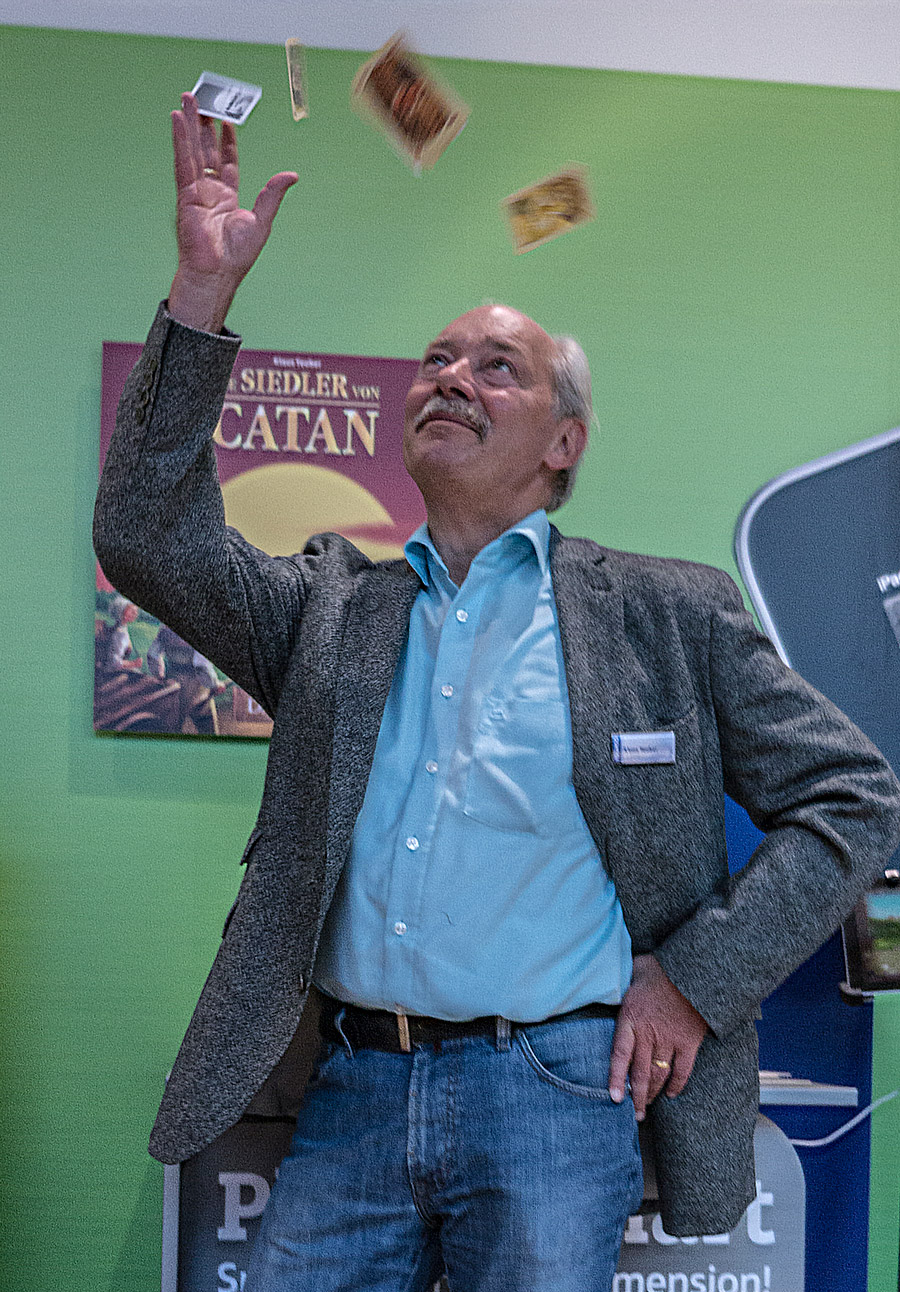 One of the elder guard of the Euro game is Wolfgang Kramer. El Grande

is such a brilliant game. Its importance in the history of the tabletop gaming cannot be underestimated. It is the granddaddy of the area control games. So I crossed paths with Wolfgang at the Spiel des Jahres and snapped a picture. Much of the time I prefer to work out a concept for the photo and work with the designer to set up something unique. But in this case, I had to settle.

As I have been working on a coffee table book of the portraits, I sent the text for Wolfgang to look at. Imagine my surprise when he offered not only to offer suggestions for his entry, but for my writing about the history of the hobby. Again, it was a moment when a hero becomes real. I decided that I wanted to include a complementary shot of Tikal

, one of my favorites, with the picture of Wolfgang. Many gifted photographers have been working on photographing tabletop games for a while now, but I have really enjoyed learning this new skill set. Here is a picture of Tikal, the first edition. 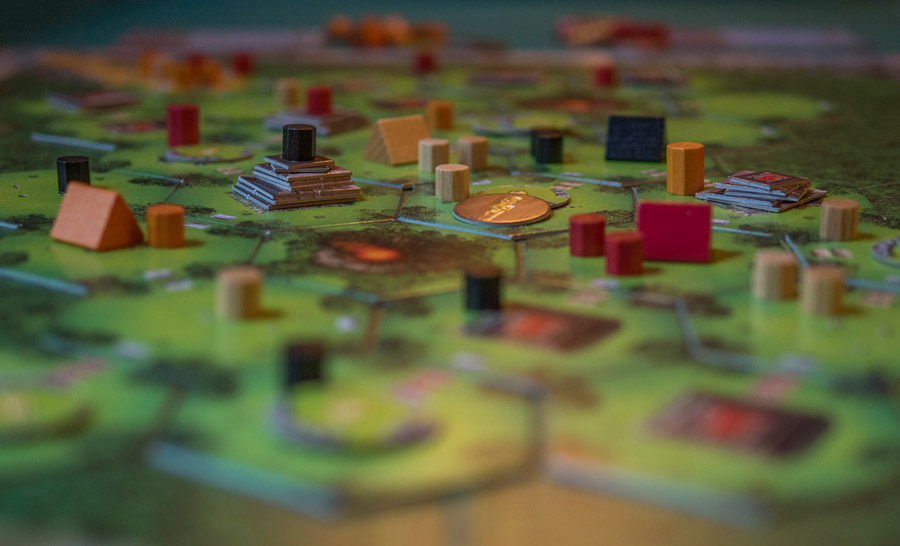 Alan R Moon somehow struck gold. After struggling as a designer, developer, publisher, and waiter, out came Ticket To Ride

. All of us that are artists, hope, but never expect to be able to make a living at our craft. With the success of Ticket to Ride, Alan was able to achieve that dream. I’ve been going to his Gathering of Friends on and off for years, though it was a bit tough to peel him away for this shot of him on a train. Although the choice of setting is obvious, sometimes the obvious is the right choice. 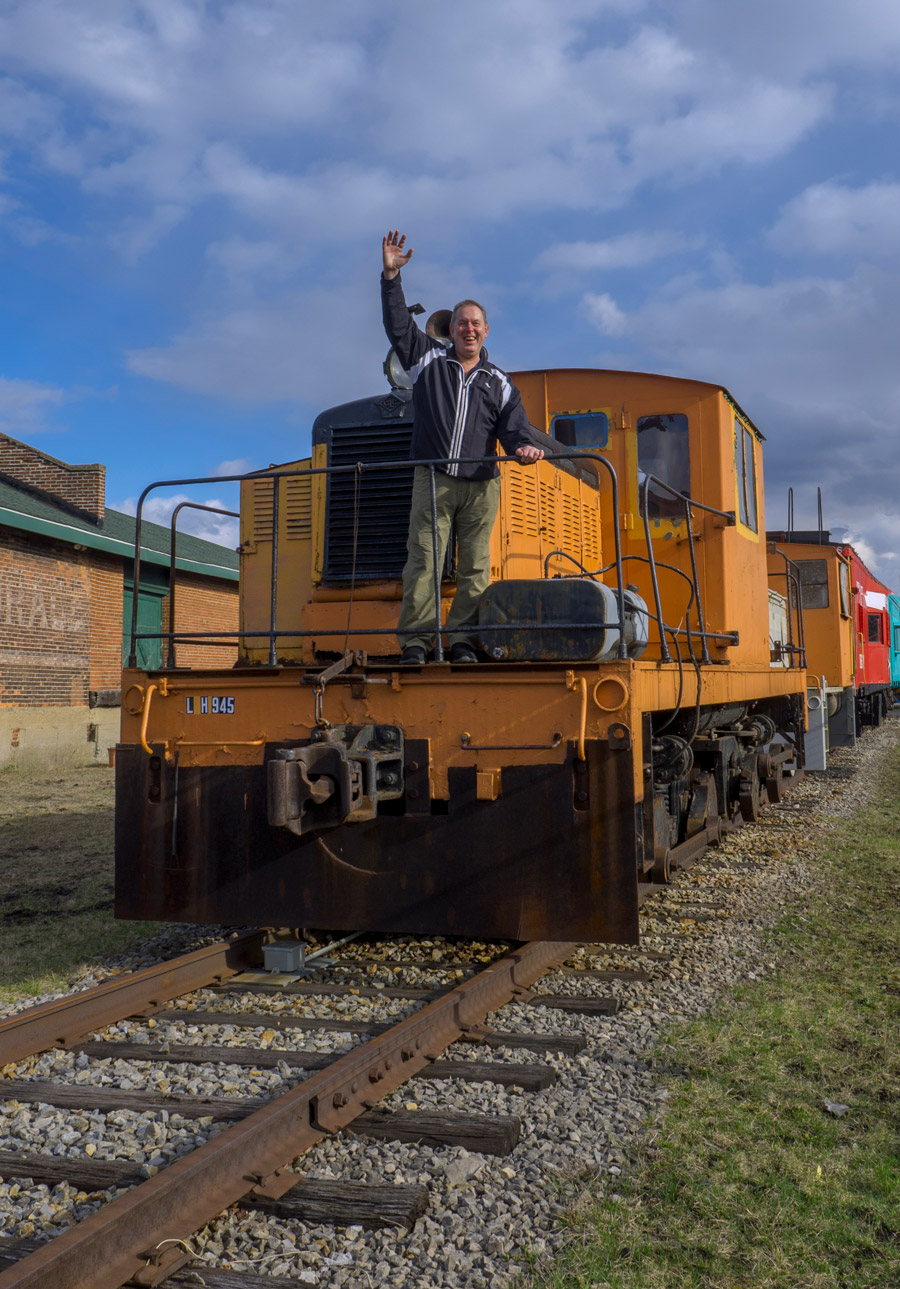 Another of my favorite shots is one of Matt Leacock. The fundamental concept was to have Matt stand on a board, like a pandemic cube. At first we found a location that was a bit too evenly lit. I wanted something that would fit with the harshness of a pandemic. I think Matt was a bit shocked that I started throwing pieces around, potentially destroying a sixty plus dollar game. As a filmmaker, I am used to spending money and using pieces as props for a single use.

For the book, I decided I wanted to highlight Forbidden Island I took two other photos at BGG.CON that also focused on the mood. One Night Ultimate Werewolf

is now the standard hidden role game played around the world with large groups. Opposite Ted and Toni’s booth at BGG was someone demoing a game that required night vision goggles. Once we secured permission to use the dark space, we found a pose that worked and I used a one-point light from an iPhone. 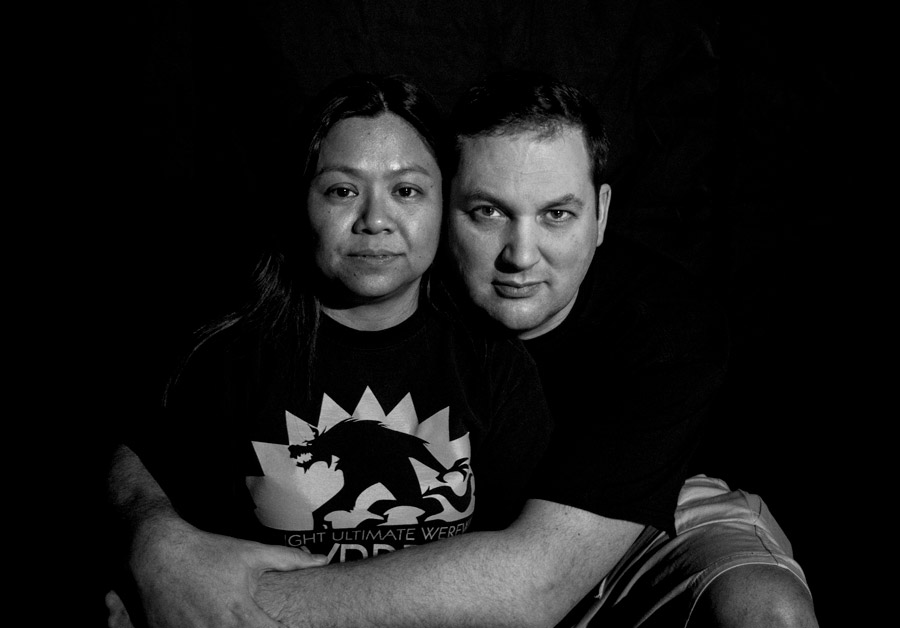 Also atmospheric was this shot of Jon Gilmour using what looks like a post-apocalyptic scene to evoke his hit, Dead of Winter 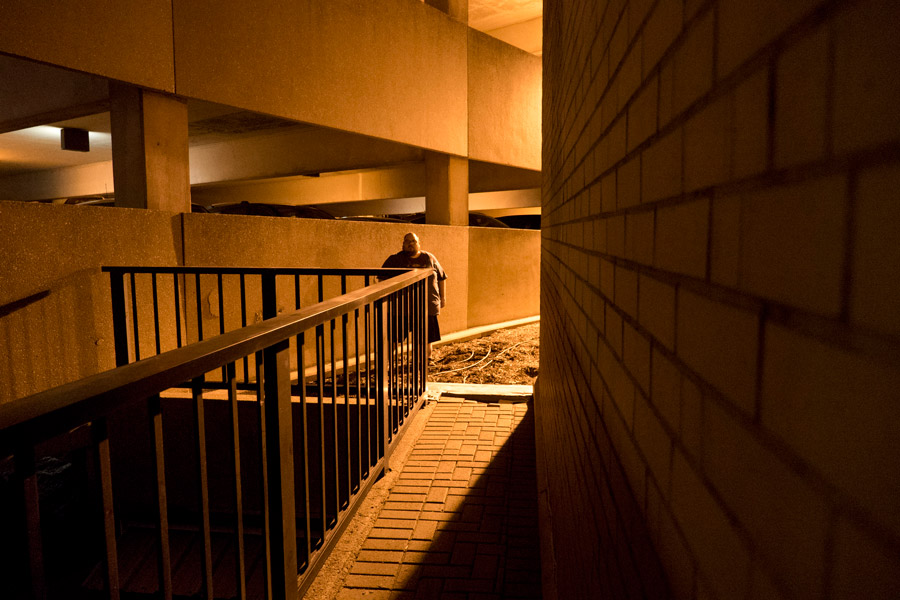 Jon co-designed Dead of Winter with Isaac Vega, pictured here with artist Fernanda Suarez in with a bevy of Ashes cosplayers at Gen Con. We thought it would be fun to have them pose with the larger than life standees behind them. 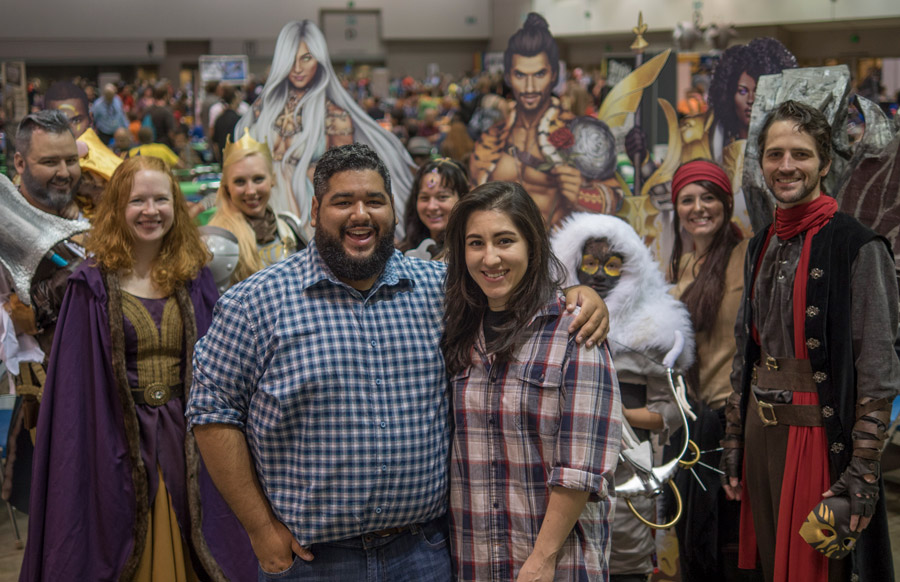 The creative process is a strange one with many false turns and twists. I must have spent six months interviewing designers, meeting with the well-established, up and coming, and new designers. I was going to Gen Con with someone I had known in passing that changed the entire direction of the project. Randall Hoyt was determined to design and publish The Next Great American Game. When I returned from Gen Con to look at footage in the editing room, it became clear that Randall’s charisma, lack of knowledge of the game industry, and passion for his game would make him a great subject. So for nearly a year, we attended conventions, I went to his home, and I attended his playtests for his game Turnpike.

Right in the middle of all of this, he revealed that he had designed another game, a small dice game called Talk+Listen for a client. It was based on time he spent in group therapy. So I grabbed a picture and then more recently another of the game itself. I’ve discovered that game photography is not only about the light and camera angle, but often about the small details in focus that evoke the game. 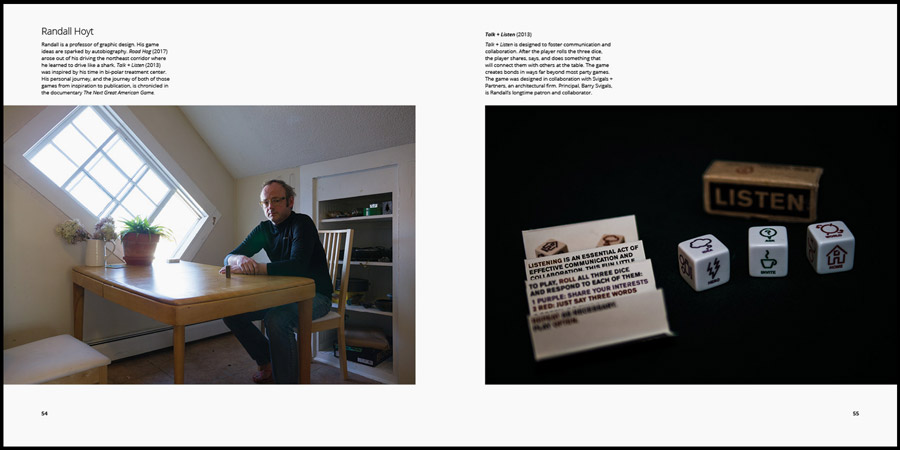 The great news is that Randall continued to work on Turnpike and it is being published as Road Hog by Jolly Roger Games/Ultra Pro and should be available by the end of this year.

The film, The Next Great American Game, follows Randall’s journey and is available here. Over three hours of extras are on the deluxe version, including interviews with Teuber, Knizia, Moon, Leacock, Lang, Bauza, and Jackson.

Currently, I have a Kickstarter running for the book of portraits as well. It features these amazing designers, and more. I leave you with a shot of one of my favorites, Puerto Rico

. This is from the limited anniversary edition. I tend to prefer natural light and I either shoot my game pictures early in the morning with the soft light, or late in the afternoon when the light streams through the window next to my game table. 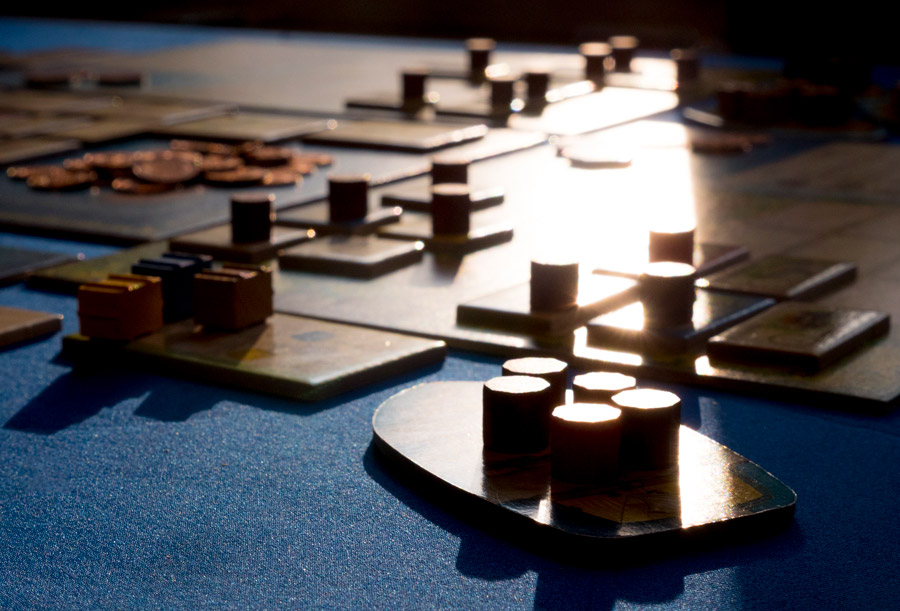 About the Author and Photographer

Douglas Morse is a professor of Media Studies and Film at The New School for Public Policy in New York City. Doug has adapted and directed medieval and Renaissance dramas for the screen – films that are studied by students and scholars worldwide. He has also directed documentaries and written and directed fiction features. Doug earned his B.A. in Cinema Studies from the University of Pennsylvania and his M.F.A in Writing and Directing from NYU’s Tisch School of the Arts.

As a gamer, his accomplishments are legion. When just a teen, he managed to trounce the Monopoly East Coast Champion. At The Gathering of Friends in the late nineties, he won tournaments of Settlers of Catan and Modern Art against some of the best players in the world, as chronicled in Alanthology. More recently, he became the champion in a ‘bluffers’ tournament held at Heffers Bookshop in Cambridge, England, culminating in a huge game of Masquerade. He outwit over fifty Brits, and has a trophy to prove it. His website, with trailers and clips from his films, is at Grandfather Films and The Next Great American Game is available over here. Doug can be contacted through either website. 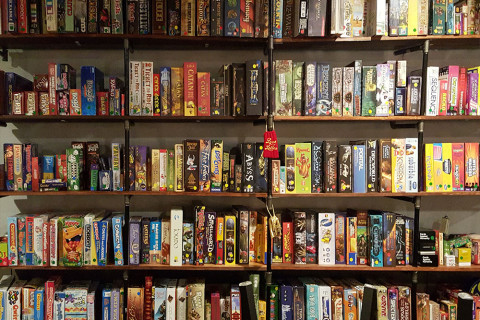 Board game shelves around the world #8 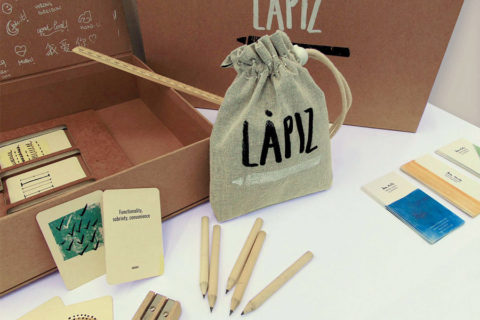 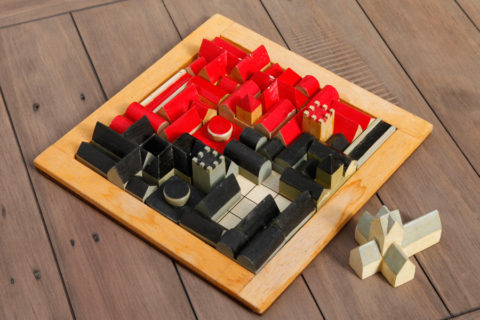