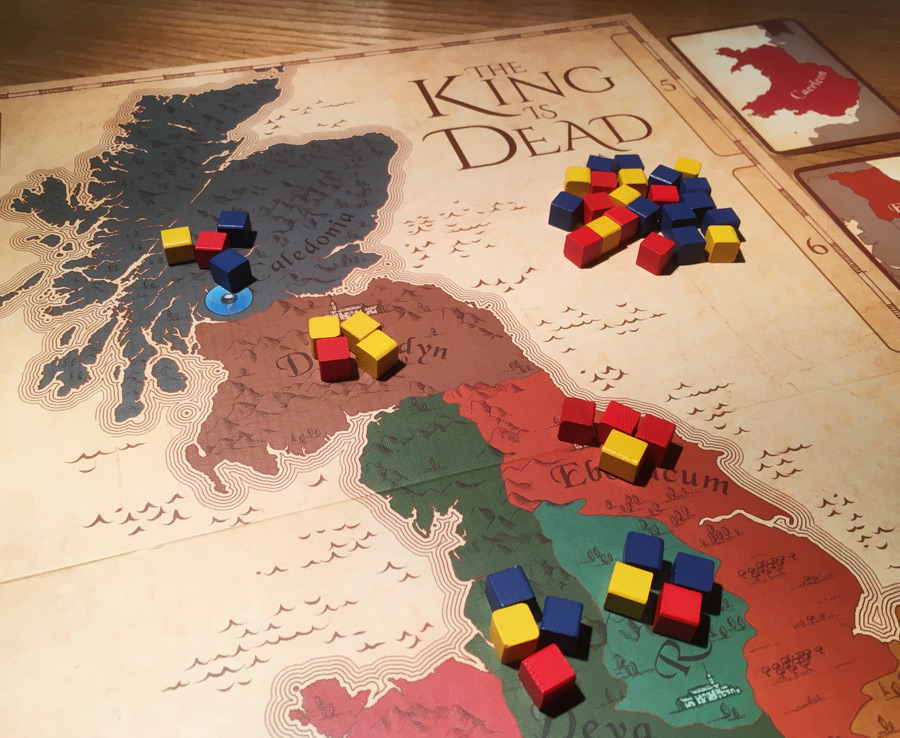 I’m Peer Sylvester, a humble teacher (is that an oxymoron?) of math and chemistry in Berlin, Germany. I also design games and, boy, I’m not so humble about that.

I grew up with games. My father always loved abstract thinking, so I learned chess when I was four. I was never too gifted though, and I probably only beat him twice in the last 37 years. But my parents also always bought the game of the year for me and… OK, suffice it to say: I grew up with games. 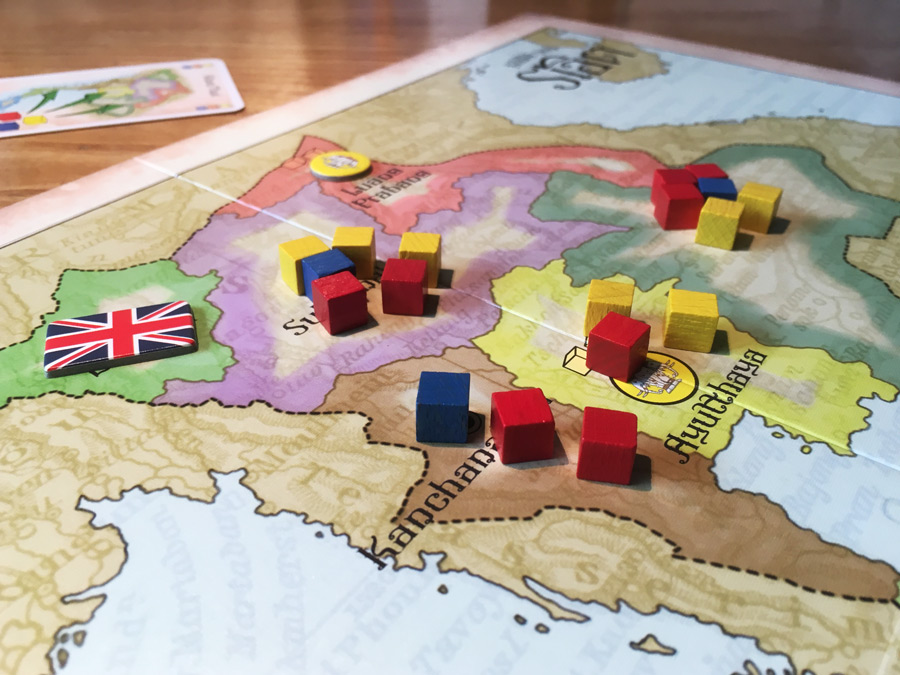 In 2003 I moved from my home town Hamburg to Thailand, to teach and to live with my then-girlfriend-now-wife, who also taught there. I loved it, but the problem was: Boardgames were a no-show there back then (it has changed a bit since). I printed out a lot of PnP games just to play something.

I also got interested in the history of Thailand and especially the fact that Thailand was never colonised. That was a great starting point for designing a game! How could that translate to a game? I thought it would be nice (even if historically incorrect) to imagine some faction fighting for control, but still showing unity towards the outside. That would be the starting point for King of Siam. 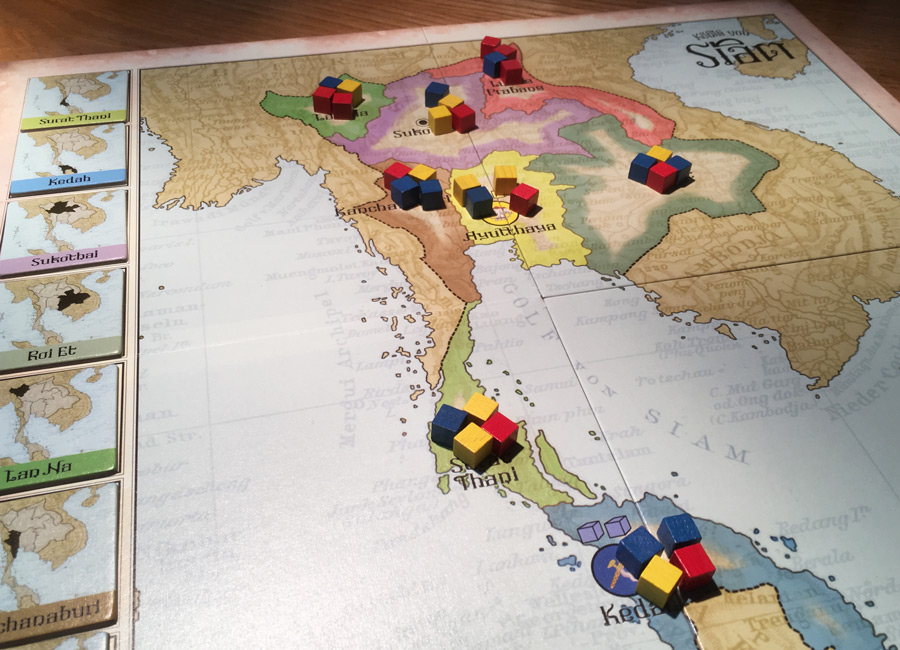 I opted for a majority game, because there was no civil war—just vague political powers trying to gain control. Also, in case a province would be tied, the British would colonise that province—without unity they fall. Unfortunately the rest of the ideas didn’t quite work out and I put the project in my box of prototypes that need an overhaul (Yes, there is a box for that. And it’s quite full too!). 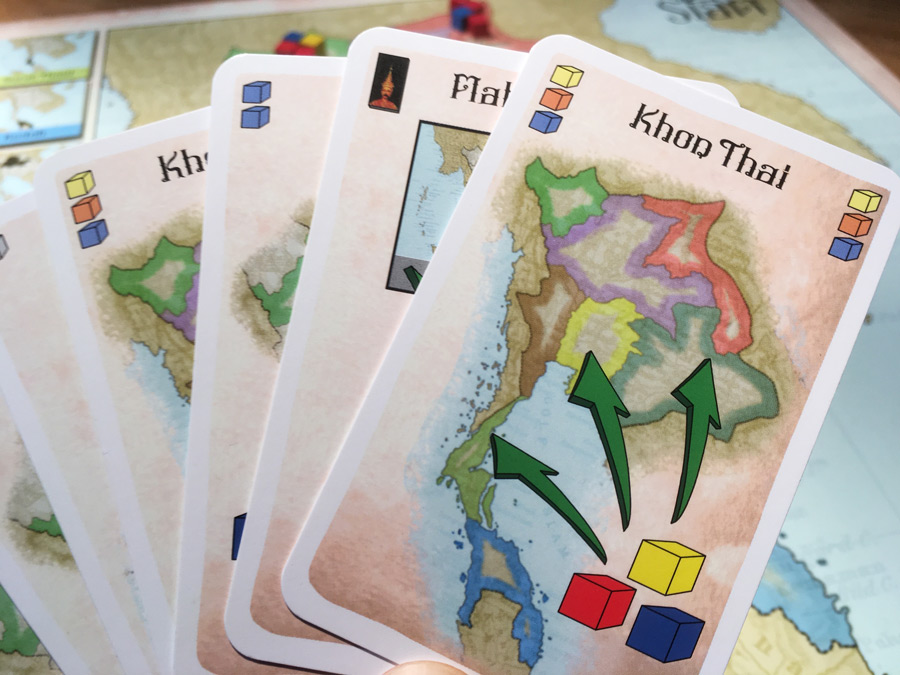 Two years later I had married and moved to Berlin to work as a teacher. There I played prototypes with other Berlin-based authors. One of them is Bernd Eisenstein and he had a prototype called Alfred the Great in which you form majorities by removing pieces instead of adding them. That game gave me the needed idea: You form majorities on the board, but you gain your own majorities by removing the pieces from the board. A conundrum! That is something you need in a good game. Looking through my “List of ideas” I found the idea of using a set of actions once and then be out of the game. Both ideas could be combined perfectly! In fact, once I sketched a map and thought about logical actions everything clicked quite easily. The first trial game was already a great success and few things have changed since then—mainly making a game with 4 players team based (after some boring games where everyone opted for the same cubes), and adding the Anti-Kingmaker rule. 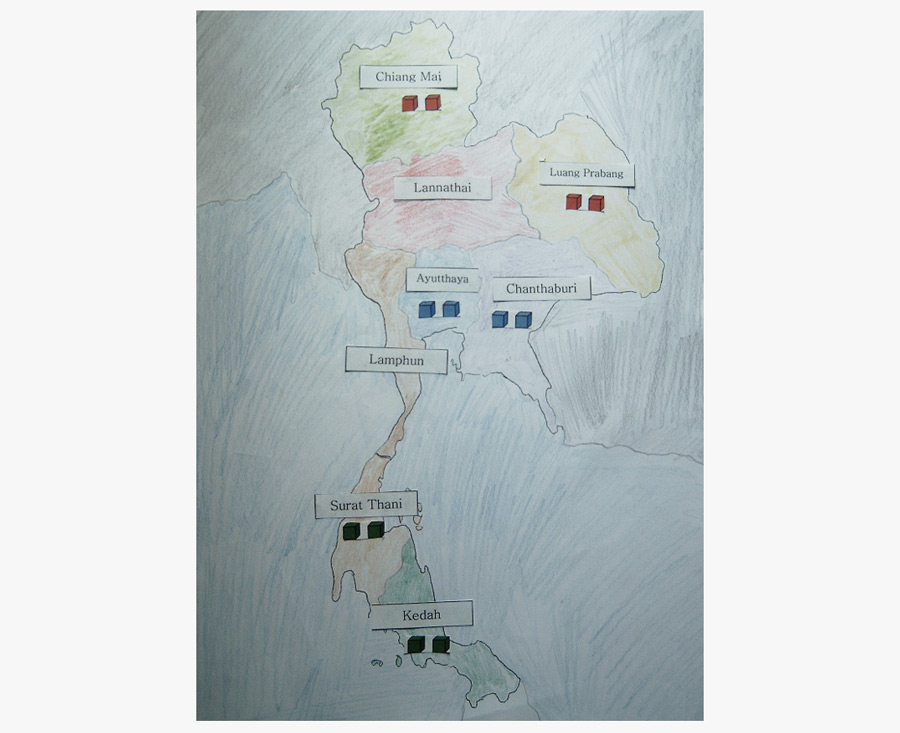 First prototype of King of Siam. Photo by Peer Sylvester.

In 2006 I showed the game to Richard Shako of Histogame and he decided to publish it in 2007. A couple of years later my contract ended and I looked for a new publisher via Boardgamegeek. Osprey Games contacted me and I signed a new contract with them. I took the opportunity to think up a new variant, just so there is something for the people who knew the old game as well. Osprey also wanted to change the theme to something their audience would be more familiar with. We brainstormed together and settled for the King Arthur theme. Using an old map, I made a list of all possible ways of having the 8 kingdoms neighbour each other. While not a huge thing, I wanted a topologically different map then before, but without giving a faction too big of an advantage or disadvantage. I believe I succeeded. 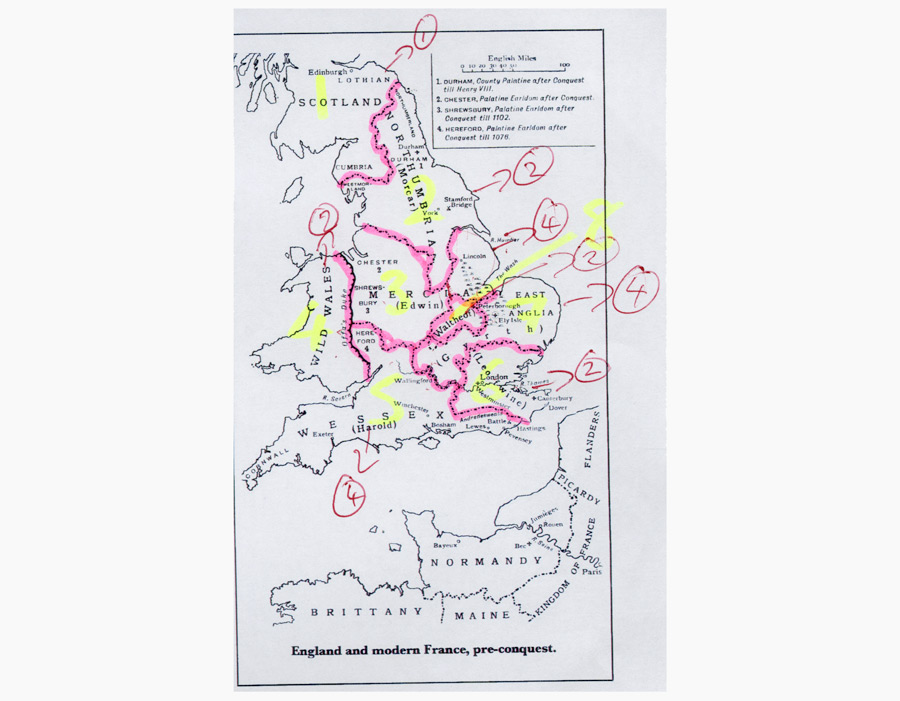 “Working map” to figure out the region borders. Photo by Peer Sylvester. 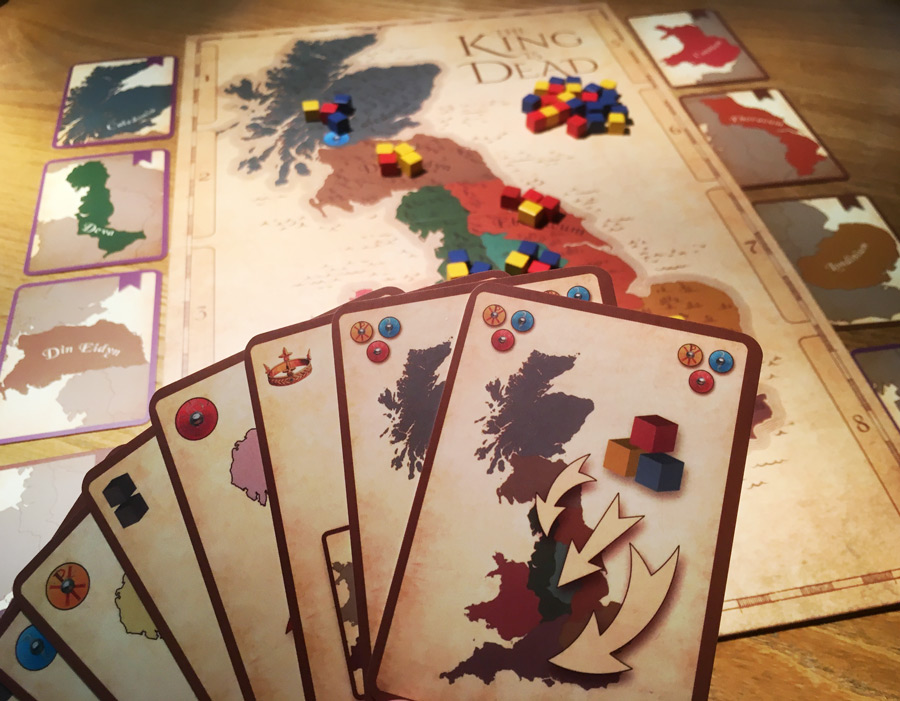 I mainly design games for fun, and also to play games that don’t exist yet. This is my main (and probably only) fixed rule: There shouldn’t be a game out there with the same set of mechanisms! There should be at least one—or even better two—new ideas in every game. I also dislike fiddly rules, so I usually design games “bottom up”: Starting with as few rules as possible and a general concept (which may be, but is not limited to, a theme), only adding things if necessary. I believe my games are easy to learn because of that. Which does not necessary mean they are easy to master, because I think the decisions you have to make are the heart of playing a game. Every decision should be hard. Every decision should matter. If that’s the case, the game is good. And, as a not very humble man, I can proudly boast that this is an apt description of The King is Dead.

Get The King is Dead on Amazon here 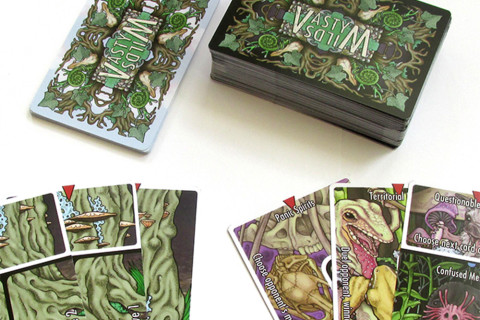 3 responses to “Royals for Royalties”

Hi. I just found this website through reddit and I wanted to comment about this game. I got this game because I was looking for a 3 player game and this is a great game for it. The mechanics reminds me of Sun Tsu (which I have) but is only a 2 player game. This game is different than Sun Tsu because you have to consider which cubes (Followers) you have in your possession. Fun game. I recommend it.

For analoggames.com, your website seems to load slow. I have to wait 5 seconds after I click on a link before I am redirected to a page. Maybe upgrade your WP plan or something 😉

Hi Paul, thanks for the comment. The King is Dead is a fun game indeed. I will look into the slowness, thanks for your feedback. – AG

The illustrations and graphics are beautiful!